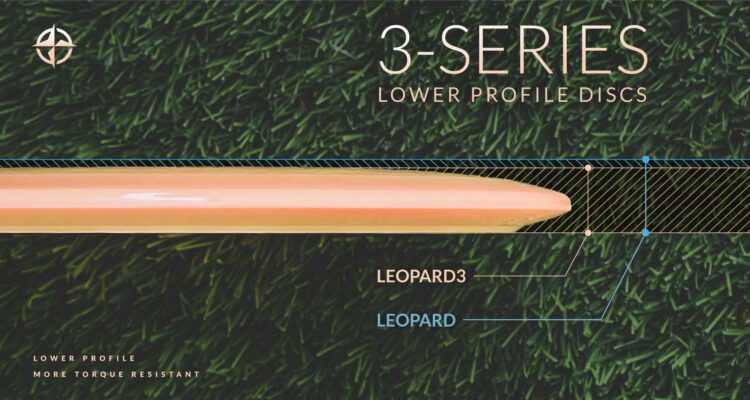 The story behind Innova’s 3-series discs

Innova 3-series discs—Roc3, Mako3, Leopard3, and so on—are low-profile versions of the original molds. It all started with the Ontario Roc, Roc #1, and the quest to make a faster, more torque-resistant Roc. Dave Dunipace, Innova co-founder, president, and chief disc designer, talks about the origin of 3-series disc variants in this episode of the Champion Disc Golf podcast.

“Okay, the original Roc was the Ontario Roc. That was Roc #1. Roc #2 is—and it says that even on the mold pieces—Roc #2 is the Rancho Cucamonga Roc. Roc #3 is a low profile Roc. After we did that, with other discs, for instance, a Leopard.. we created a low profile Leopard so we just continued that with the other discs that we, you know, we got a Leopard now we got a low profile Leopard and it’s a Leopard3. Same thing with the Mako we had the Mako and it was like hmmm, people want that disc in a low profile more than they want a domey Mako so we made the Mako3. Which is just the low profile deal and discontinued the regular Mako because people were going for the Mako3. Now in the case of the original one, the Roc, and the Roc 3, we don’t make the original Roc anymore. The Ontario Roc, you know, that that mold broke anyway. The Rancho Cucamonga Roc I think is probably a better professional type Roc anyway. We first came out with the Roc3. And there you know the Roc is a very good seller and you know it was way up here in sales and the Roc3 was down here but you know over the years the Roc3 has come up and up and up and it may actually be outselling the regular Roc now, it’s a possibility.”

The thing I hear mostly is they like the way it feels in their hand. That is, you know what it does actually aerodynamically is different but I don’t hear much of that at all. I hear “it feels good in my hand.” They are faster and they tend to be slightly less stable, maybe sometimes a little bit more overstable, low speed. Possibly that could possibly happen as you’re taking away some of the camber—you know, the the tallness of the disc—it’s called camber…useless fact. [laughing]

Feels better in your hand. That’s number one. Well, anecdotally most people think it feels better in their hand the lower profile thing. Now as far as for throwing, there it is absolutely more torque resistance. That’s a big deal. It’s a little faster, so if you’re comparing a… well, let’s just do it… you look at the chart here and the Leopard is at a Speed 6 and the Leopard3 is at a Speed 7. So it’s a little faster. That’s why there are different speed characteristics. The Leopard3 is more torque resistant than the Leopard by a little. The Leopard—the normal Leopard—has a little bit more carry, float, than the Leopard3. But the Leopard3 kind of makes up for it because it’s going faster. So it generates more lift for its profile than it would, you know, at a slower speed. Now as far as being dumpier, I don’t think you can say that the Leopard3 is more dumpy than the Leopard.

Oh TeeBird3, TL3, oh yeah! I was not a TL fan, ever. It just seemed it was too finicky. It was either going to be too stable or too unstable or some I don’t know what it was. Maybe it was a lack of torque resistance or something like that. Where you know when you threw the TeeBird you didn’t have to worry about it was stable right? The TL was not stable and how unstable was it going to be? It wasn’t you know, it didn’t end up being reliable enough for me but the TeeBird3, TL3 changed that. It was a lot more reliable in my my opinion. It was a little bit faster and you know had a better grip it was more torque resistant and and more reliable.

The regular Leopard is a winner for more recreational type players you know. It’s got more float. They can’t really take advantage of the speed, the higher speed, of the of the Leopard3 because they haven’t got it. But the regular Leopard you know in a lighter weight disc is a pretty good starting driver for them. The TeeBird3 that’s another one kind of like the Roc you know. Whereas the TeeBird’s very very popular out there with a lot of players and the TeeBird3 is like down here but it’s starting to catch the TeeBird you know it’s coming up coming up coming up and it probably has to do with the torque resistance and the feel in the hand you know be my guess.

They [pros] don’t care that much about how far they throw a disc they do care about how far they think they can throw a disc and they want a replicability. They want to be able to do the same things every single time. So, if you’re talking about glide, for them, that’s not necessarily a good thing. A glidey TeeBird is not necessarily a good thing uh if it’s if they make a tiny little mistake and it’s a bigger mistake with the TeeBird than it is with the TeeBird3. And that’s kind of like what we’re getting to… the lower profile forgives little off-access torque better than the higher profile.