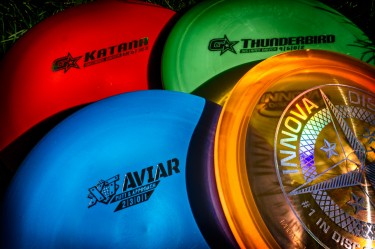 We’re having a giveaway to celebrate the release of the Thunderbird! The stability of a TeeBird with the speed of a Valkyrie; it can be described as a seasoned Firebird with less fade. The Thunderbird is predictable in wind and a great long range placement driver. Five lucky winners will recive a 1st Run Champion Thunderbird, a GStar Thunderbird, an XT Aviar, and the all new GStar Katana. If you want to know more about the Thunderbird, check out the full review (and giveaway) from All Things Disc Golf!

You get a nice combination of speed and glide with just a little bit of turn followed by a moderate fade. Champion Thunderbirds will show less turn and more fade while the GStar Thunderbirds will have a slightly straighter flight.
–All Things Disc Golf

These models have just been released and are headed around the world to official Innova dealers. For exact delivery dates, contact your favorite retailer.
a Rafflecopter giveaway
Share it !