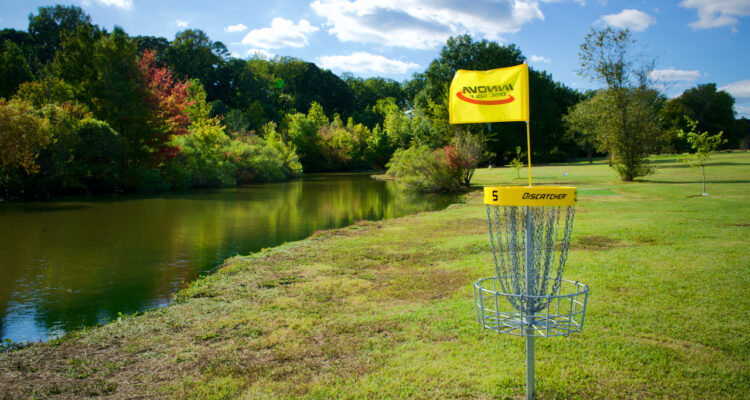 A Few of Our Favorites

With over 15,000 disc golf courses worldwide, and over five new ones opening daily, there are far more must-play courses than we could ever list. But here are some that we’d like to highlight. These locations are among the most scenic and well-designed disc golf courses in the world. 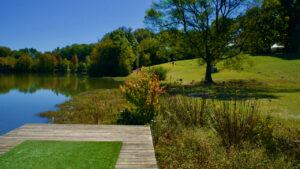 The Winthrop Arena is as mentally demanding as a course can get. Located on Winthrop University’s campus in Rock Hill, South Carolina, the course presents a combination of narrow fairways, strategically-placed OBs, and treacherous water hazards. Features like the long walk to the tournament-making (or breaking) hole 17, make Winthrop as much a battle against your own nerves as it is a battle against the course.

Winthrop has hosted the USDGC since the tournament’s inception in 1999. Celebrating its 25th anniversary this year, Winthrop has had decades to develop into the legendary disc golf destination that it has become. In that time, the course has seen more life-changing victories and heartbreaking losses than any other Major venue in our sport. 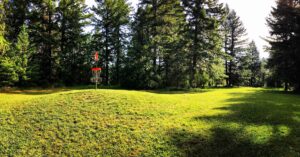 A round at Riverbend Disc Golf Course at Milo McIver State Park is a trip into another world. As you enter the forest of massive, old-growth trees, characteristic of the Pacific Northwest, everything other than disc golf and the awe-inspiring scenery around you seems to disappear. Located in Estacada, Oregon, Riverbend is the dream location for a course. A perfect combination of wooded and open fairways tests every shot shape, from rollers, to backhand bombs, to flex forehands. It is easy to see why the Beaver State Fling has been a favorite stop of touring professionals for nearly 20 years. 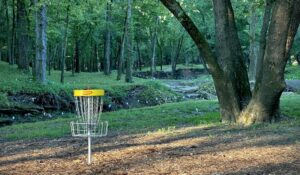 Harmony Bends was the highest rated course in the world on UDisc in 2020. Typical of a John Hauck design, Harmony Bends has multiple available lines on nearly every hole. Risk/reward decisions and precise landing zones make this course as much about smart decision making as it is about executing difficult shots. Grassy, open fairways lined with dense rough keep the best shots well-rewarded and the worst shots thoroughly punished. Elevation change, river-crossings, and wide clearings through the thick forest make Harmony Bends the championship level course that it is.

Lewiston and Auburn, Maine were voted by UDisc to be the number one city in the United States for disc golf. That accolade is in large part due to the courses found at Sabattus Disc Golf. Sabattus has the three top voted courses in the state of Maine, all together on one unbelievable property. This is a disc golf destination for players from beginner to pro, with a variety of courses ready to suit all levels of experience. Each course offers unique shot shapes and even the easiest course on the property will present top players with fun challenges. A picturesque stream meanders through the property, adding to the charm of this disc golf wonderland. 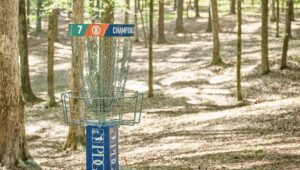 The WR Jackson Memorial Course is a championship level, wooded course located at the PDGA International Disc Golf Center (IDGC), in Wildwood Park in Appling, Georgia. In 2022, WR Jackson hosted the inaugural Champions Cup, a new disc golf Major set to return in 2023. After such overwhelmingly positive feedback from the players and fans, the Champions Cup will remain at WR Jackson, likely for years to come. The IDGC property contains two other top level courses, as well as the Headrick Frisbee Museum, the Disc Golf Hall of Fame, and a world-class proshop. The IDGC is a must-see location for all disc golf enthusiasts and WR Jackson is a must-play course. 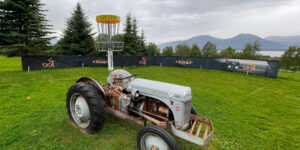 Øverås Disc Golf Course, in Vestnes, Norway, has the best balance of jaw-dropping scenery and compelling, challenging disc golf found on any course in the world. Beautiful fairways overlook the Norwegian fjords and towering mountains beyond. In the summer, sunsets can last for well over an hour. If the scenery wasn’t enough, the course has 18 world-class holes, each fair, but challenging. Features like “The Gates of Valhalla,” a triple mandatory sided by two huge swords, are levels of detail and expense that make Øverås well worth the trip. The 2022 PCS Sula Open, held at Overas, was the first ever DGPT event outside of the United States and the first ever international live broadcast by Disc Golf Network. In 2023, the PCS Open will return to the Pro Tour schedule, this time as an Elite Series.

Hillcrest Farm is the story of the Best family’s whim to put some underutilized farmland to better use. That simple idea quickly turned into the making of one of the greatest courses in the world. This John Hauck design, located on Prince Edward Island, recently hosted the Canadian Championships, drawing top players from around the globe.

Oak Grove, in Pasadena, California, was the first permanent disc golf course installed in the world. This Ed Hederick design may be a little dusty and hard to follow, but it laid the groundwork for more than 15,000 courses to come worldwide.

The Base Camp Adventure Course in Moab, Utah is the most unique course on this list. The otherworldly landscape of Moab creates obstacles you’ve never encountered. Giant red rocks elevate or obstruct the basket on each hole. Expanses of open desert allow you to unleash, but intelligent course design means you’ll need more than just a big arm to shoot well. 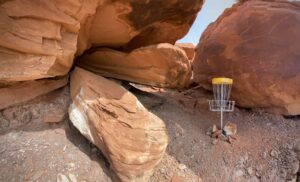 Morley Field, in San Diego, California, is an historic course, established in 1978. Since then, Morley has become the most popular pay-to-play disc golf course in the world. With seven or eight basket locations for every tee, the course will be in a new layout nearly every time you visit. With its great location, and affordable fee (just five dollars per round) it is no wonder Morley has seen such success.

Planning a disc golf vacation? Visit Mauka Disc Golf in Princeville, Hawaii. The new 18 hole layout was designed and built by Innova’s own Harold Duvall, Andrew Duvall, and Darrell Bankes in December of 2021. This is one of the most professional and impressive private disc golf facilities that there is. The views are stunning and the disc golf strikes a great balance between fun and challenging.