The Shark is Innova’s best all around golf disc. It’s a very accurate disc for drives and approach shots, you can even putt with it. New to disc golf? The Shark is good for beginners, especially in lighter weights.

Dave Dunipace, Innova Co-founder & President, designed and released the large diameter Roc in 1988 to wide acclaim. Off the shelf, the Roc has a distinct, overstable fade at the end of its flight. Responding to the Roc, Dave said, “The Shark came from a need, in my mind, to have a slightly less overstable mid-range.”

The Shark became the perfect mid-range disc for players of all skill levels. It’s predictably straight and capable of hyzer or anhyzer drives and approach shots. Beginners benefit from the smooth rim and consistent release. 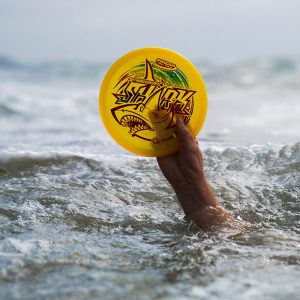 The Shark was the first to utilize V-tech, a convex lower outer edge that creates straighter, longer flights. The Leopard was the next disc to adopt V-tech. The Shark and Leopard are both featured in the DX 3-disc Starter Set.

Take Your Forehand Further with the Lion

The lower profile and added rim mass make the Lion more torque-resistant, which is ideal for sidearm throws. “The Lion ended up being exactly what I wanted the Shark to be initially,” Dave said.

To celebrate 30 years of the Shark, we molded a limited edition in Luster Champion and decorated it in XXL 2-color foil.