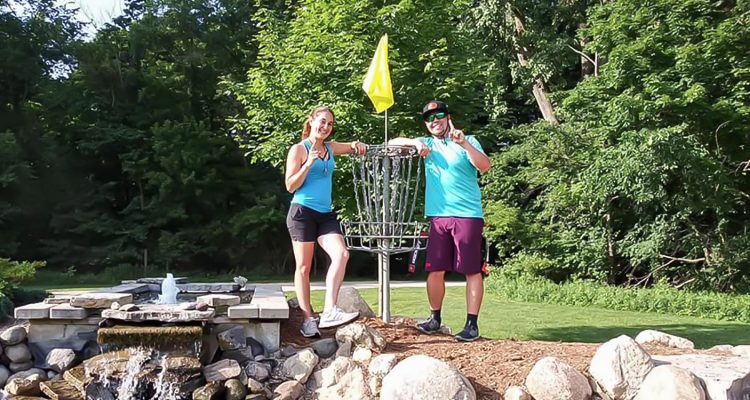 On the heels of the Ledgestone Open, many touring pros headed to Lansing, MI for the Discraft CCR Open. The two day A-tier featured the highly rated Burchfield Park (Devil’s Den) for the MPO and FPO pool. MPO players played the long tees, measuring over 9,600 feet, while the FPO field used shorter tees on six holes.

In a FPO field of 18, Jessica took the win finishing -11 for the tournament—one of two women to finish under par and nine strokes ahead of the second place finisher, Sarah Hokom. It wasn’t all smooth sailing. After round one she trailed Hokom by two strokes, carding just three birdies. But in rounds two and three she recorded a combined 12 birdies and had a bogie-free final round. Her putting game was key to low scores, “My putting felt great, finally,” she said. This is Jesscia’s 3rd A-tier win in 2019, with a previous victory at the Utah Open.

After his first career National Tour win at the 2019 Masters Cup, “Double G” returns to the spotlight taking down the CCR Open at -37 under par! His low score was peppered with eagles, six in total and three more than second place finisher Paul McBeth. His eagles were spread out with two coming in the first round, one in the second, and three in the final round! Garrett eagled holes 3 and 7 twice and was the only person to eagle hole 6 in all three rounds.

As if that wasn’t enough, he went 12 down through a string of 9 holes and had 100% C1x putting to shoot -15 in the final round! He also managed to lead the field with a 31% parked stat across all rounds and shoot the hot round for the first (-13) and final rounds (-15). Avoiding bogies was critical, “…I was able to use my strengths to my advantage on this course because the course did call for some [distance]. Through the week I managed to get my putting practice in. That helped as well. Only having one bogey per round helped me achieve having 2 hot rounds!” said Garrett.

What’s next for Double G? “My goals toward the end of the season are to continue fighting as hard as I can to be at the top to give me an opportunity at a World Title. I got a B-Tier, got an A-tier, got an NT, what would be better then sealing the year up with a Major!” said Garrett.