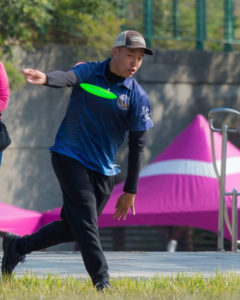 Jacky threw all Innova at the Asia Open and after connecting with Team Innova, he’ll be throwing Innova into the future. Since joining the team, we had a short Q&A session. Here’s what Jacky had to say.

How did you discover disc golf?

My parents taught me how to play Frisbee when I was kids (around 5 years old). That is about the time I knew disc golf. Actually, I really play disc golf in 2017.

What was your first disc?

Taiwan made Fast Back disc.

What Innova discs are you throwing?

These are the discs in Jacky Chen’s bag

Where will you be competing this season? Anywhere in the U.S.?

Yes, in 2020 I plan to play Ledgestone Insurance open In Eureka, Illinois in August. It is a DGPT Event. My friends live there so he can take care of me during the tournament.
I would like to play 32nd Japan National in Maiko, Japan in September. I want to win a champion in Japan.
I also plan to play Shenzhen Open in Shenzhen China in November. Definitely, play for 2020 TDGA Disc Golf Championship in December. Please visit Taiwan and play with me!

What’s your favorite course, and why, in Taiwan?

Shinhai Bridge disc golf course. This is my home course. I play and practice disc golf on the course every weekend.

What courses outside Taiwan do you hope to play someday (and why)?

Winthrop Gold. It is USDGC course and my dream to play. I hope I can get the USDGC qualification in the future.

Why do you love disc golf?

It is fun playing and chatting with friends together on course. Meet more friends!