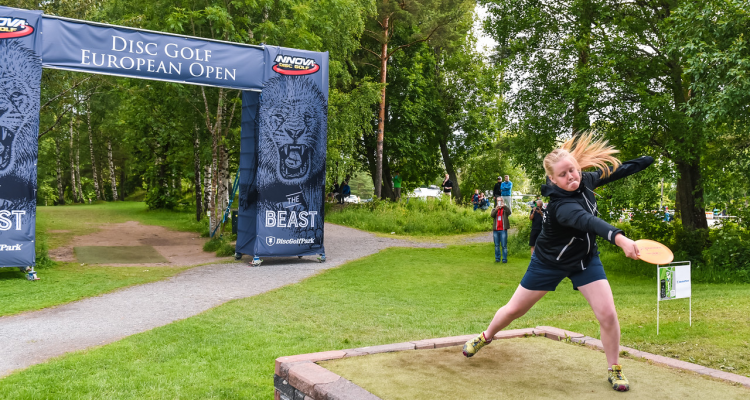 Currently ranked 5th in the world, Salonen, of Valkeakoski, Finland, is coming off a big 2016 season when she won the Finnish title for the second year in a row, won the EuroTour, and won the European Championships – her biggest win yet.

The highlight of 2016 was the European Championships. The competition was intense but it felt so great to play with top Europeans, to meet new people, and to represent Finland. The gold medal capped the incredible week. I couldn’t believe that I had become the European Champion and it took a while to digest it.
– Eveliina Salonen

Salonen found disc golf in late 2012 and quickly picked up the sport, spending countless hours on her home course at Valkeakoski DiscGolfPark. She made her PDGA debut in 2014 and made an immediate impact by rising to the top of the podiums in nearly every event of her rookie year. She later became the Finnish Champion in 2015 in only her second try, and also had a very respectable 5th place finish at the European Open that year. All of that led to her remarkable 2016 season which also included a gutsy Tali Open performance where she finished ahead of Catrina Allen, proving that a European player can challenge top US talent.

A versatile player, Salonen can go long with her backhand or forehand. And she knows what she needs to work on to compete at the highest level.

EVELIINA SALONEN: WHAT’S IN THE BAG

”I’ve noticed that my putting game isn’t at the same level as the top players. I need to improve my accuracy and mental game… Sometimes a few bad putts can get inside my skin,” said Salonen.

Salonen has found a few favorites from the Innova line-up. The Star Destroyer flies far on forehand and backhand throws, while the Star Wraith works well on straighter lines. Roc3 in Champion plastic is also a straight flyer with a moderate fade. All three have something in common, they’re all reliable discs in all conditions.

She’s looking forward to her season start in February when she’ll be making her first appearance on American soil at the Gentlemen’s Club Challenge in Las Vegas. We are certainly excited to follow her in the upcoming season! Welcome to Team Innova, Eveliina!