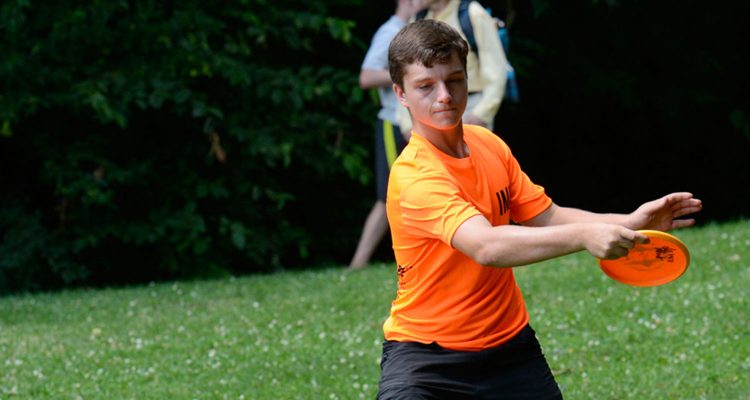 This year at 2016 Am Worlds in Madison, WI , faced with a similar neck-and-neck scenario, McDonald said he used all of that pain and disappointment from last year as motivation as he stepped up for a 50-footer to win it all. Determined not to let this World Championship slip by, McDonald proceeded to make the biggest putt of his life and won by one stroke.

Afterwards the fifteen-year-old from Lockport, IL, was elated.
“It’s like a dream come true. When I was 11 years old, I dreamed to be World Champion and that was my whole goal to be a champ,” said McDonald, adding that coming so close last year fueled him to work even harder this year. Once again as the 2016 Am Worlds week wore on, Izak McDonald found himself in the thick of things, thanks largely to amazing rallies in rounds 4 and 5. But instead of battling Anthony Barela, who bested him in 2015, McDonald faced another youngster, Isaac Robinson, 15. The two young men fought valiantly, but in the end it was McDonald and his McPro Aviar that remained on top. “I did the best I could and more to get that win,” said McDonald, who also relied heavily on his Disc Mania C-Line PD2 .

Third place went to US Amateur Champ Gavin Rathbun, of Oswego, IL, who had another impressive major, but couldn’t overpower McDonald in the finals.

It would be really cool for someone to win Am Worlds and Pro Worlds in the same year. I’m gonna try to make that happen.
– Izak McDonald, Team Innova

Now McDonald has his sights set on the Pro World Championships in Kansas. Not surprisingly he wants to win. He realizes it may not be in the cards within the next few years, but he said he’s gonna work as hard as he can to win at the professional level. Who knows, he may translate that Madison magic to Kansas.

Other Innova Team members with notable 2016 Am Worlds finishes include: