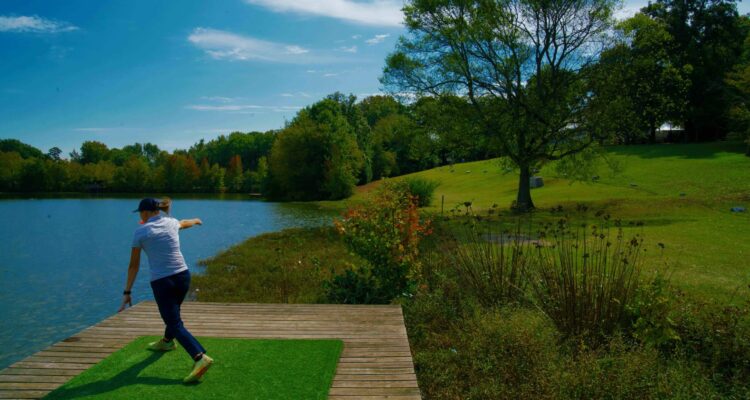 The field came out attacking during the second round of the 2022 United States Disc Golf Championship and Throw Pink Women’s Disc Golf Championship. With nerves settled after day one, more experience on the new layout, and perfect course conditions, the players were able to shoot some of the lowest scores the Winthrop Arena has ever seen. Team Innova had athletes in both divisions shoot course records. With multiple of our players just a few strokes off the lead, we are in a great position to make a run at these coveted titles.

Team Innova’s Ohn Scoggins and Henna Blomroos both shot smoking hot 10 under pars, setting a new course record for the Throw Pink course at Winthrop. Ohn made 100% of her inside the circle putts for the day. She is 2nd in the field for Fairway Hit percentage and Birdie percentage and she has the lowest OB rate of any player in the FPO. Henna Blomroos sits in 4th place and is leading the field in C2 Hits in Regulation and Strokes Gained Tee to Green. Both Ohn and Henna are playing some of the best disc golf we have seen all season on the biggest stage in the sport.

Eveliina Salonen and Hailey King are currently tied for 12th place. Eveliina leads the field in C1 and C2 Hits in Regulation. Jen Allen sits in 15th place and started her day off with an ace on hole one in front of a cheering crowd.

In the MPO, Bradley Williams came out on day two shredding. He shot a bogey-free, course-record-setting 10 under par that rocketed him 16 spots up the leaderboard into solo 4th place. He leads the field in Parked percentage and has the lowest OB rate of any player in the MPO. Bradley Williams has never finished in the Top 10 at the USDGC; now just two strokes off the lead, he is making a push for his best ever Major tournament result. 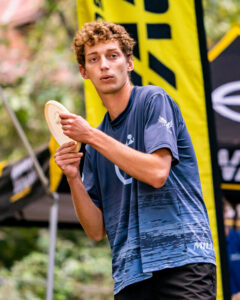 Calvin Heimburg sits in 7th place. He made 100% of his inside the circle putts in the second round. After taking a triple bogey on hole 6, Calvin turned his game around and birdied eight of the next ten holes. James Proctor is in a tie for 12th. He shot a great round at 8 under par, jumping 24 spots up the leaderboard. Proctor took a highlight eagle on hole 10, throwing 500+ feet over the out-of-bounds to inside 30 feet.

Tomorrow is Moving Day and the players will be making a charge for their place on the Championship Sunday lead card. Watch the action live on the Disc Golf Network starting at 9:30 AM EDT. Check this article at the end of each day for a tournament update and follow @TeamInnovaDiscs on Instagram and Facebook for all the highlights from this year’s USDGC and TPWDGC.