The United States Disc Golf Championship is reaching a milestone in 2023 – 25 consecutive years of life-changing victories and heartbreaking losses played on the most hallowed grounds in the sport of disc golf, the Winthrop Arena. Next year, the event aims to celebrate its anniversary with the most professional, best-attended, and most fun tournament in Rock Hill history. But the Road to the Championship starts long before the tournament kicks off in October.

Below is the list of qualifying events for the 2023 USDGC. To match the ever-proliferating global talent in disc golf, next year, USDGC has more international qualifiers than any year prior. In 2022, we saw Gannon Buhr, the youngest winner in USDGC history, battle to the final hole with European Open Champion, Niklas Anttila, of Finland. In 2023, with the addition of new European qualifying events, could this be the year that someone from outside the United States takes down the US title? 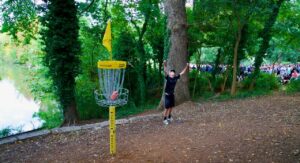 A total of 4 spots will be available at each of the US events listed below. For the international events, 2 spots will be available. Competitors who participate in qualifying events that are already USDGC-eligible will be excluded from the qualifying process. In case of a tie for the final qualifying spot, the tournament director should hold a sudden-death playoff to determine the winner. If a playoff is not possible, the final spot should be awarded to the player with the lowest final-round score.

Divisions other than Open (MPO) may be eligible to qualify if they compete during identical days and on the same course layout(s) as the MPO division. Decisions on whether or not non-MPO divisions are allowed to qualify are up to the tournament director of each event. A player may only qualify once at the official USDGC qualifying events listed below. Earned spots are not transferable.


Individual qualifying rounds will take place at Winthrop on Monday, October 2, 2023. Each of the 4 lowest rounds will earn the right to compete in the 2023 USDGC. Only 4 spots are available. A sudden-death playoff will resolve ties if necessary.

Exempt from Qualifying and Special Invitations