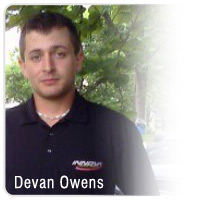 Devan Owens: King of The Lake:
Epic is a good way to describe disc golf in Tahoe. Imagine adjusting your game to fit the thinner air (which makes discs fly differently), while battling mountainous courses, challenging terrain, and fierce competition. That’s what Devan Owens had to battle to claim his first NT victory. Devan’s third round bested the rest of the field by three strokes, which contributed to his win on the week’s biggest stage.

Ricky Wysocki and Derek Billings put together solid final rounds to finish second and fourth. Tim Skellenger finished fifth, while Joe Rovere took ninth place at this National Tour event. In Masters, the battle was fierce and the scores were just as hot as the Open field. Jay Reading finished in second, tying second in the Open field, and Patrick Brown finished two strokes back in third place.

Tali, Finland – Paul McBeth topped a 96 player open field to win by four strokes at the Tali Open. He played stellar golf to start the finals with a big lead. Valarie Jenkins also won with a nice nine stroke buffer. Next up is the Presidents Cup on Wednesday. USA vs Europe! Then this weekend is the European Open, Europe’s premiere disc golf event.