Paul McBeth’s 18-under par round at the 2018 Great Lakes Open is arguably the best disc golf round ever. “An 18-under on a course like that is, in my opinion, way more difficult to do than his 17-under was at [Fountain Hills Disc Golf Course],” said Innova President and Co-founder Dave Dunipace.

The Toboggan course record was broken the day before with 11-under par scores from Kevin Jones, Dave Feldberg, and McBeth. “The course kind of lengthened this year. A lot of new tee pads, a few new basket placements. We didn’t know whether -11 was great or kind of average,” said McBeth.

Paul started round two with a quick birdie, hitting a 38-foot putt on hole 1. “Starting out with a putt like that is a great feeling,” said McBeth. “I think having a great putt is what really develops that consistent round.”

Hole 2, a 726-foot par 5, is the most-eagled hole at Toboggan and McBeth took advantage. He gambled with an aggressive tee shot and it paid off putting him in ideal position for the second shot, “Being on the right side allowed me to putt a little flex and movement on it and it landed about 20 feet from the basket for eagle.” 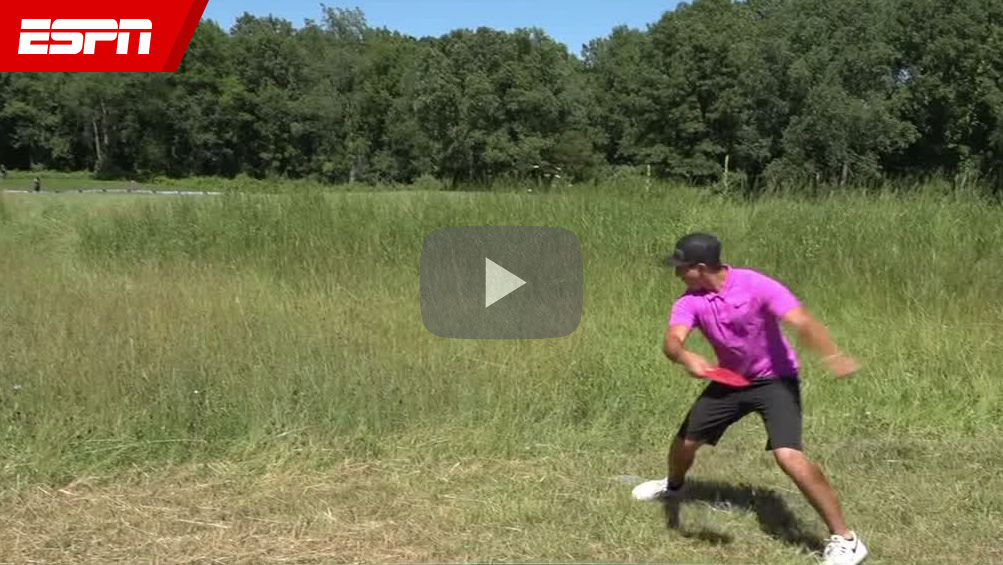 The historic round caught the eye of ESPN producers.

The fireworks continued on hole 3, a 915-foot downhill par four. “The first round I made the mistake of going right and getting myself into some trouble. So, I told myself this round “Fix that. Don’t do it again.” and just throw it out into that field. Being out on that left side is a little bit higher too so you can see the basket.” With a good look at the target, McBeth put a routine upshot into the air. The smooth hyzer dropped in close, skipped up, and bounced off the top of the catching tray just missing back-to-back eagle scores. He would tap in for the easy birdie.

McPro Aviar
The McPro Aviar is McBeth’s putter of choice and is molded according to his specifications. This limited edition Tour Series disc is available in black and Galactic versions.

McPro Color Glow Roc3
Designed from the popular Roc3 mold, the Tour Series “McGlow Roc3″ is custom-tailored for McBeth. He wanted a Roc3 that he could season into a finesse mid-range and this is end result.

Champion Thunderbird
The Thunderbird is predictable in wind and a great long range placement driver. Pros depend on its shot shaping ability, everyone benefits from its consistent, predictable flight.

Champion Roc3
The Champion Roc3 as a predictable fade, making this an ideal mid-range in almost any situation. Molded in Champion plastic, this Roc3 has a stiffer feel and more stability than the McPro Color Glow Roc3.

McBeth was on cruise control until hole 10, the third most difficult hole, where he slipped on the teepad. Left with a lengthy approach, he was able to get up and down for a par. He quickly rebounded with a birdie on hole 11. And the birdies held steady until his putt on 17 where he had a 27-footer for birdie. “If I’m gonna miss, I wanna miss hole 17. I don’t want to miss 18.” If McBeth had tingling nerves knowing the last hole was a stroke away, it wasn’t present in his putt. He hit the chains solidly, scoring another birdie and setting up the pressure-packed finishing hole 18.

Picture this is for the Worlds. You’re gonna have this pressure.
– Paul McBeth

Correcting his round one mistake of going out-of-bounds off the tee, McBeth placed his forehand tee shot nearly 50 feet away from the target. On a hot putting streak all round, McBeth was setup to capitalize. “As soon as I let this go….I knew it wasn’t dead center. But I knew it was in.”

Hey @paul_mcbeth, I guess @espn heard it was your birthday and decided to wrap up your -18 into a solid 2 MINUTE spot as their gift to you! 😎🎁 Check out the full video on our FB page! #happybirthday #mcbeast #paulmcbeth #discgolf #jomezpro #sportscenter

What. A. Round. Make sure to catch the post produced coverage on @jomezpro tomorrow.

What's it take to stick a 50-footer to make history? The heart of a champion. Congratulations to @paul_mcbeth on an extraordinary feat yesterday at the Great Lakes Open! Full story on his 18-under par round up now at PDGA.com. Photo: @alyssavanlanenimages for DGPT

Paul McBeth returned to his winning ways this weekend with a dominant performance at the...More