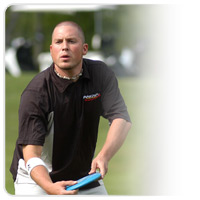 30th Kansas City Wide Open
All eyes were on Kansas City this weekend as the PDGA National Tour returned to this historic disc golf city for the 30th year. Avery Jenkins finished rounds 1, 2, and 3 tied for the lead. He played well from start to finish, just 2 strokes back, good for second place, his best NT finish of the season. Dave Feldberg was close behind in 3rd, while Will Schusterick rounded out the top 5. Other top 10 finishers were Paul Ulibarri, Steve Brinster, and Paul McBeth.

In Masters it was Patrick Brown racking up his second NT win in a row, and his sixth win of the season. Masters Team Captain, Jay Reading, finished in second.

Valarie Jenkins is the current leader in the PDGA NT Points Series. Paul Ulibarri, Dave Feldberg, Paul McBeth, Avery Jenkins, Barry Schultz, and Garrett Gurthie are all in the top 10 in the men’s standings.

In Missoula, it was Nathan Sexton edging teammate Christian Dietrich for the win at the Zoo Town Open.

The distance World Record holder, Christian Sandström, proved he can get it done on the course as well. Christian rallied to grab the Sula Open title in Norway, beating out Karl Johan “KJ” Nybo. Espen Møkkelgjerd finished in third. Camilla Jernberg finished second in the Open Women.

Steve Loyd turned in a nice 3rd place finish in the Idaho Masters in Boise.