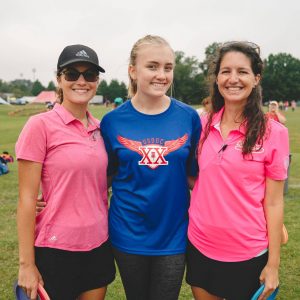 This year’s Throw Pink event at the United States Disc Golf Championship was extra special. For the first time ever, Throw Pink was held on the Winthrop University campus, just a few throws away from the iconic Winthrop Gold Disc Golf Course. Dozens of women and girls were in attendance, including clinic leaders and sponsored athletes Madison Walker, Kona Panis, Hope Brown, and special guest 4-time World Champion Des Reading.

Throw Pink is a non-profit with the mission of encouraging women and girls to get out and be more physically active through the game of disc golf. The program was established in 2013 to make a difference to women’s health related charities by raising money through fun disc golf initiatives.

“I would love for these women to go home and be thinking about the next time they can throw a disc. I think it would be a really awesome thing to just have people pumped about disc golf when they leave here.” —Sara Nicholson, Throw Pink Co-Founder

The October 6th event kicked off when Des Reading gave a quick overview of the history of disc golf and then broke up the group into three skill stations: driving, approach, and putting. She demonstrated basic throwing techniques including proper grip, generating power, and putting routines. Madison, Kona, and Hope showcased their distance skills and gave simple tips to throw far. Following the skills sessions, everyone played a casual round on a temporary course designed by Andrew Duvall, designer of this year’s Winthrop Gold course.