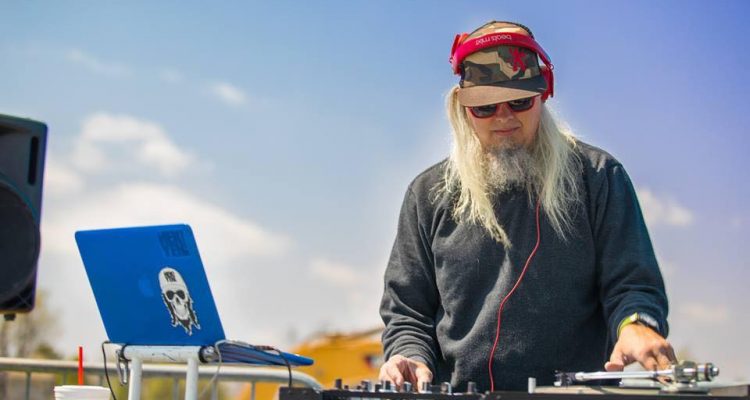 During the 2018 United States Disc Golf Championship (USDGC) third round, as the lead card climbed Hole 18’s fairway, a remixed version of the well known JomezPro theme filled the air.

DJ Hek Yeh, the event’s official DJ, was set up outside the USDGC Pro Shop overlooking Hole 18 and had finished crafting the remix, premiered the song as the players made their way to their second shots. The track enhanced the experience for those present. “That was so awesome,” recalled Jonathan Gomez of JomezPro.

It was DJ Hek Yeh’s coming-out-party to the disc golf world.

Take a listen to it here. It starts Hek Yeh’s USDGC XX Mix Tape, which includes it and other awesome tunes he played at the event. 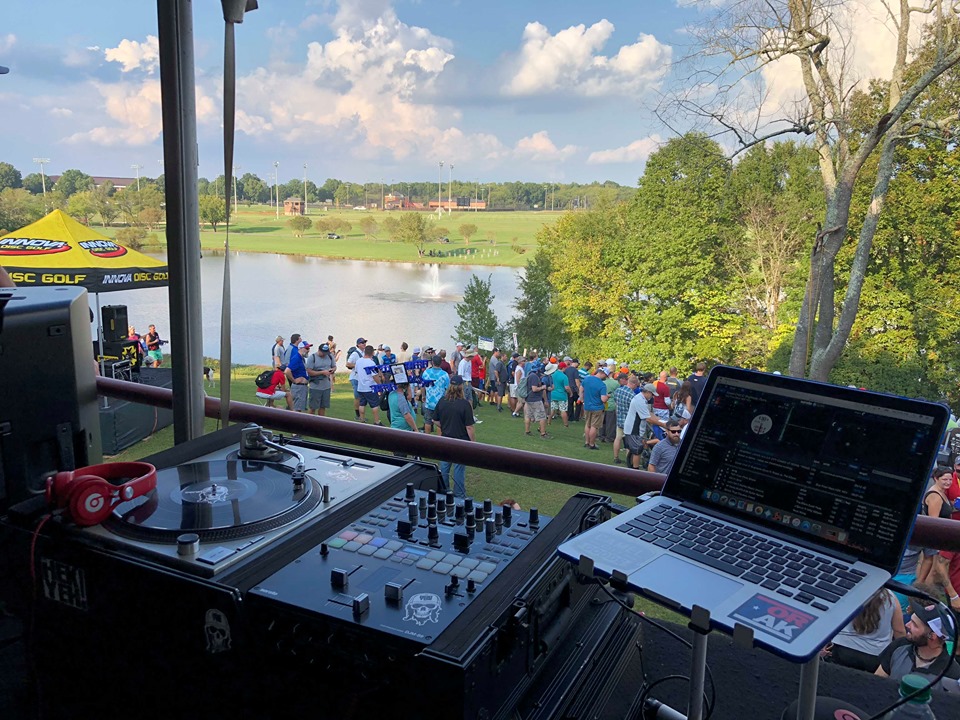 Who is DJ Hek Yeh?

Looking at DJ Hek Yeh, AKA, Bryan Short, with his long grey-white hair and goatee, one might guess he’s an entertainer. Hek Yeh is a showman, someone who keeps the party jamming.

For a little more on Hek Yeh, here’s a promo video by Sabrina Lee.

Residing in Winston-Salem, N.C., Hek Yeh, 46, is a full time DJ hosting typical gigs like weddings and clubs. His love of disc golf drove him to find new ways to combine his passions of music and disc golf.

This passion for music and disc golf led him to become the USDGC’s official DJ and was the driving force behind his current endeavor, DJ Hek Yeh’s Putter Parties.

The Putter Party is DJ Hek Yeh’s vision of bringing disc golf, music, and people of diverse backgrounds together.

About 60 people took part in his first putter party at Winston-Salem’s minor league ballpark in May and he had similar turnouts for two additional events. The event format features a putter course with challenging shots, a doubles putting competition, prizes and other fun activities, enveloped in his heart-pounding music.

Here’s a summary of the first putter party in Winston-Salem from the local Fox News affiliate.

Unlike at a typical disc golf tournament that plays over a large area, his putter parties are relatively confined and open to players of all ages and skill levels.

Hek Yeh’s Sound: A Little Bit of Everything

Though the disc golf is relatively new to Hek Yeh, he’s a veteran at running high-energy events. “I’m just here to rock the party,” said Hek Yeh, who has DJ’d for Slick Rick, Juvenile and opened for Steve Aoki, Waka Flocka, 2 Chainz, Snoop Dogg and Dirty Heads to name just a few.

Here’s a clip of him bringing the house down at a middle school.

Calling himself an open-format DJ, you should expect a diverse mix when it comes to his musical playlist.

“If I come to a party I may go from Lil Wayne to Willie Nelson to Usher to Ed Sheeran to who knows who else,” said Hek Yeh, who spent time as a caterer, youth minister, and even as a sports agent for football, basketball and baseball. One of his firm’s more famous players was NFL kicker Jay Feely. Following the 2011 NFL Lockout, he found his calling as a DJ.

Many of his tunes are remixes he crafts himself. He’ll hear a song and then apply the DJ Hek Yeh “fix” in the form of a handful of edits or a full blown remix. One of his most successful is a remix of 21 Pilots’ song “Ride” that has more than 387,000 plays on Audiomack, a site where Hek Yeh and other DJ’s shares their latest tunes.

Hek Yeh was first introduced to disc golf nine years ago but he started playing seriously a year and a half ago. Tired of getting beat by his friends, he bought a basket for his backyard and dedicated himself to learning the game. After hours of practice putting one day it just clicked. “I ran into the kitchen and told my wife, ‘I know what I’m doing!’” recalled Hek Yeh. “From that day on I got excited about it. It became a passion.”

Currently, Hek Yeh plays in the intermediate or amateur masters division. Some of his most trusted discs are the Firebird, Teebird3, Bullfrog, Roc3, and Destroyer. “My Star Destroyer is a great feeling disc in my hand and comes out like fire,” he said.

Prior to his USDGC DJ gig and his putter parties, Hek Yeh remembered sitting on a tee bench one day with his friends and announced that he wanted to be Disc Golf’s DJ.

He followed that realization up with more thought, prayer and then contacted Innova, which led him to DJing the Winthrop Gold Experience that Innova hosted for players attending the Amateur Worlds Championships in Charlotte last year. Players were invited to the USDGC’s Winthrop Gold Course in Rock Hill, to play several holes in Championship conditions as Hek Yeh spun tunes on the patio of the Winthrop Shack (home of the USDGC Pro Shop).

He later returned to that same patio as the official DJ of the 2018 USDGC and became an official Innova Celebrity Ambassador afterwards. 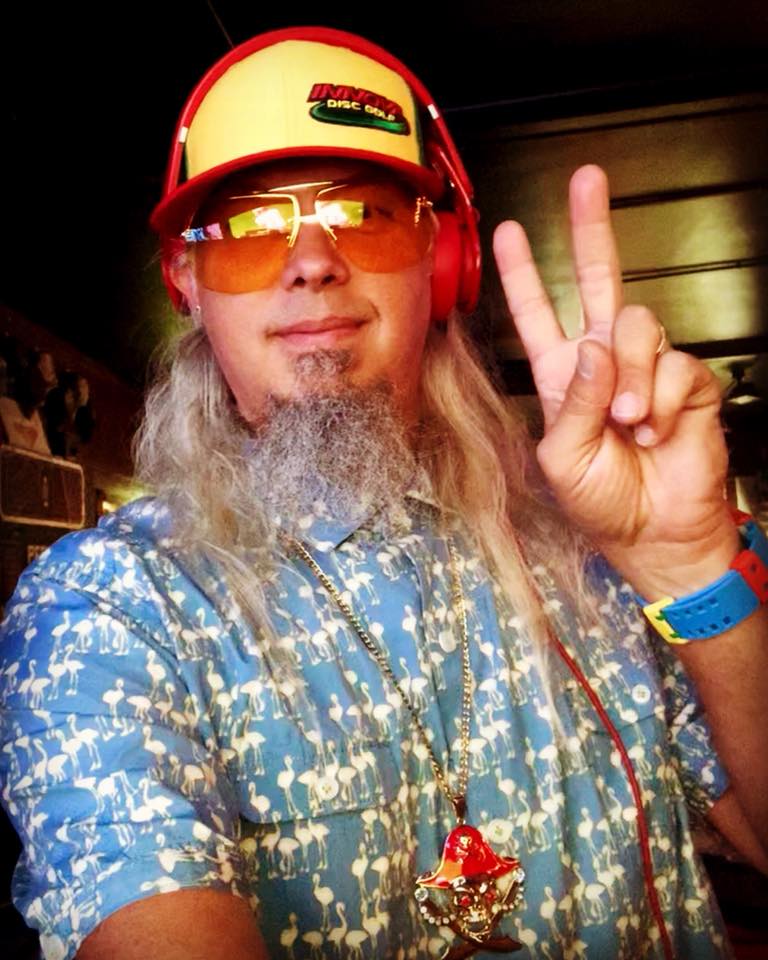 Hek Yeh Returns to the USDGC for 2019

During this year’s USDGC, join Hek Yeh at the USDGC Pro Shop for his daily Patio Party after each round. For more information visit usdgc.com or Facebook.