The 2022 Ledgestone Insurance Open was a weekend of intense competition, challenging courses, and huge payouts. Team Innova had epic highlights and strong finishes. Anthony Barela took 4th place and was in close contention for the MPO win from round one. Randon Latta tied for 8th place, making back-to-back personal best finishes for Randon at Elite Series events. Calvin Heimburg fought his way into the top 10, shooting a course record setting nine under par in the third round that moved him 45 spots up the leaderboard. Ohn Scoggins charged her way into second place with a strong final round and an all-around exceptional putting performance. And Lisa Fajkus finished in a tie for third place, her best result at a Disc Golf Pro Tour event yet. With only a few big tournaments left in 2022, Team Innova is making a powerful push to round out one of our best seasons in history.

With over 2200 players competing across Pro, Amateur, and age protected divisions, Ledgestone is one of the most widely attended tournaments in disc golf. In addition to drawing huge numbers of competitors, Ledgestone is known for its unmatched payouts and charity. This year, the MPO and FPO payouts totalled nearly $125,000, the largest pro purse on tour. What’s more, the Ledgestone Insurance Open has donated $400,000 to St. Jude’s Children’s Research Hospital since 2014.

The Elite Series event was played on the OB-laden Eureka Lake Temp course and the tightly wooded Northwood Black course. Eureka Lake presents challenging water hazards and OB on nearly every hole, but provides scoring opportunities. Northwood Black demands precision shots down tight fairways to small landing zones; it is more of a game of defense against big numbers than it is a course that you can attack. Even par at Northwood Black was 1022 rated both rounds showing why Ledgestone is likely the hardest event of the year in terms of scoring. The winner, Ricky Wysocki, averaged just six and a half strokes under par per round. 11 over par for the weekend was good enough to take cash in the MPO.

Team Innova battled these challenging courses better than most. In both the MPO and FPO divisions, we had six players finish in the top 20. Anthony Barela had an amazing weekend, starting with a 1072 rated first round at Eureka Lake. Usually known for his success on open courses, Barela proved himself as a well-rounded competitor on the Northwood Black course. A.B. shot two solid rounds in the woods, keeping himself on the lead card from the second round on. He ended the tournament in 4th place, tying his best ever result at an Elite Series event. The young player showed that he is champion material. Expect top finishes from Anthony Barela in events to come. 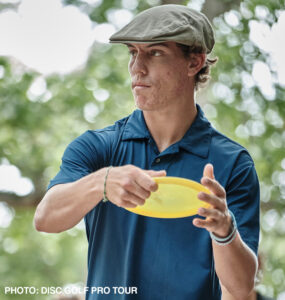 Randon Latta continued a breakout run that started at DGLO. The 2022 Ledgestone Open marks Randon’s first ever top 10 finish at a DGPT event. Calvin Heimburg bounced back to 10th place after an uncharacteristically rough second round that left him positioned to miss the cash line. In the third round, Calvin shot the new Northwood Black course record of nine down and jumped 45 spots up the leaderboard. Joel Freeman finished in a tie for 12th and was 2nd in the field for Fairway Hit percentage. Nate Sexton and Garrett Gurthie tied for 20th place.

In the FPO, Ohn Scoggins continued what must be the best season of her career. Her 2nd place finish this past weekend makes for Ohn’s fourth consecutive podium at Elite Series and Major events. She led the field in Circle 1 putting, Circle 2 putting, Strokes Gained Putting, and Scramble percentage for the weekend. Keep all eyes on Ohn later this month at the 2022 PDGA Professional Disc Golf World Championships in Emporia, Kansas.

Lisa Fajkus had an outstanding weekend as well. She took 3rd place, her best ever result at an Elite Series event. Holly Finley and Maria Oliva tied for 12th. Juliana Korver placed in 16th and led the field in Circle 1 hits in regulation. And Kat Mertsch took 20th. The winner, Missy Gannon, became the 7th unique player this season to win a Pro Tour event in the FPO. That is already the most ever in a single year and there are still big tournaments upcoming.

This weekend’s TruBank Des Moines Challenge will offer another opportunity for new athletes to take the spotlight. Playing out on the challenging, Juliana Korver designed, Pickard Park, this will be the field’s last chance to get dialed in at a Pro Tour event before Worlds. At the end of the month at the 2022 PDGA World Championships in Emporia, Kansas, we will see a field more prepared and determined to win than for any other event of the year.