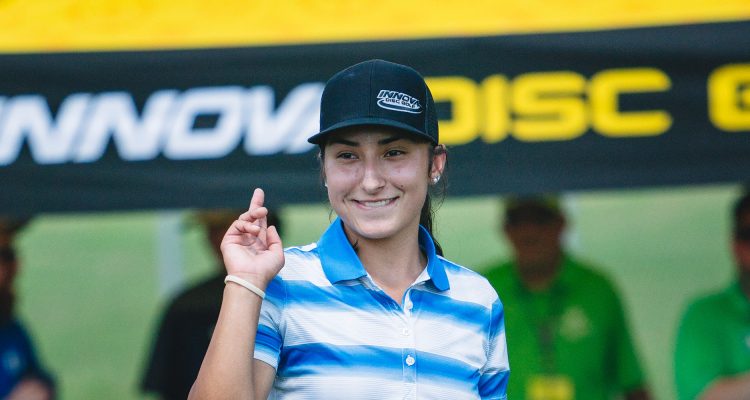 It was an unforgettable week in Charlotte, NC for the 2018 Amateur Disc Golf World Championships. Players battled through heavy rain during the early days of competition. Mid-week, many players and fans visited the Innova Tour and USDGC Experience. For Saturday’s final round, the sun came out, the conditions warmed up, and the competition was hot—especially in the Advanced Women’s division with three athletes leading the field, all within one stroke each other. Adding to the excitement, two of the final four Advanced Women players are sisters, Valerie and Alexis Mandujano. Both are Team Innova athletes and both came to Charlotte on a mission… take on the Worlds courses, card the lowest scores possible, and may the best player win. It all came down to the Saturday finale on a temporary nine-hole layout at Renaissance Park where Alexis finished with a two-stroke victory and the title of Advanced Women World Champion. We caught up with her to find out more about her Worlds experience and the role of family in disc golf. 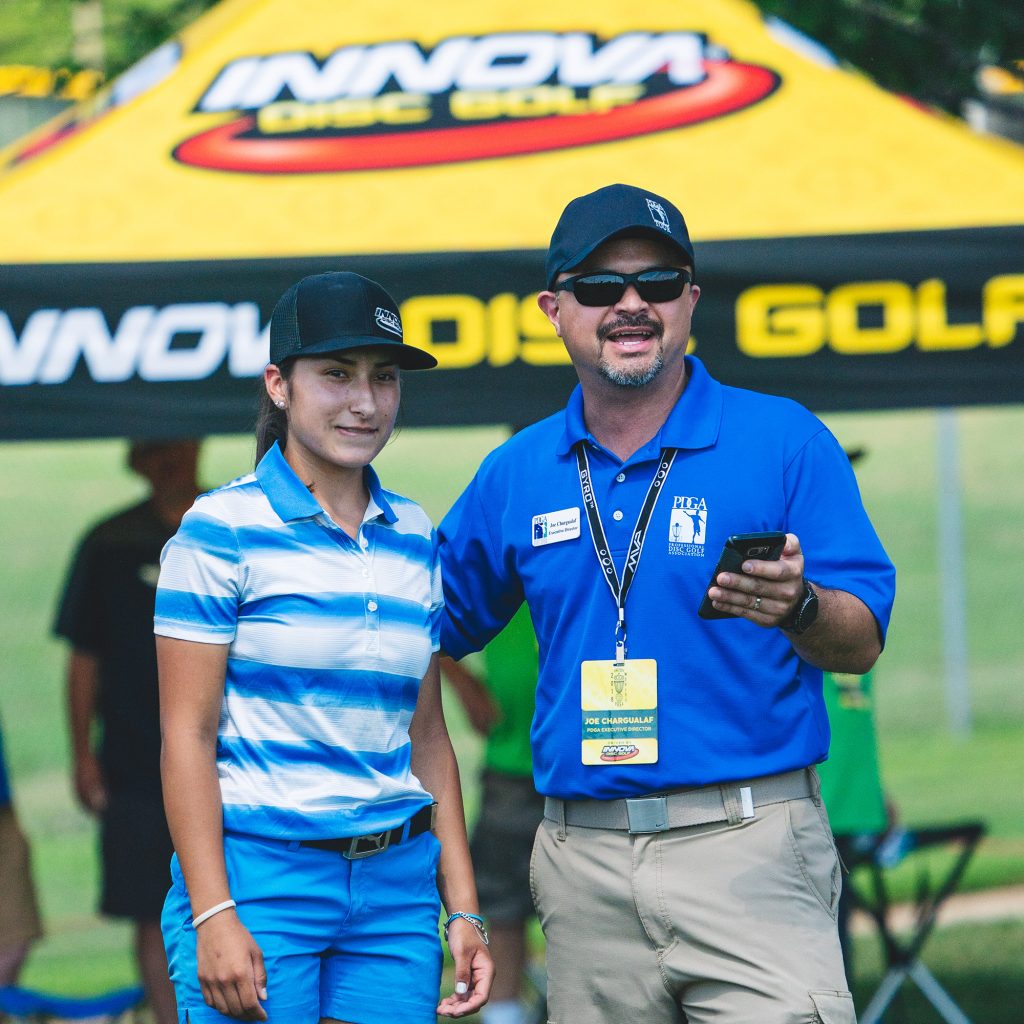 Has it completely sunk in that you are now the 2018 PDGA Women’s Amateur World Champion?

Yes. For me it sunk in as soon as Joe Chargualaf (PDGA Executive Director) announced that I was the winner right after the last putt. Moving up through the amateur ranks was five years in the making so that was a huge moment for me.

How would you describe the Am Worlds courses compared to your courses back home?

Definitely the biggest difference was all of the elevation change.

At what point were you the most nervous during the event, and how did you calm your nerves?

It definitely had to be the first hole of the Final Nine. I knew that no matter what the outcome was, that I was going to leave it all out there. That helped calm the nerves.

At what point were you the most calm? Are there any things in particular that helped you to relax and/or stay focused as the week went along?

I was most calm when I made the lead card. Being there and having my the support of my family helped. It made it feel like there was no pressure for a lot of the tournament. 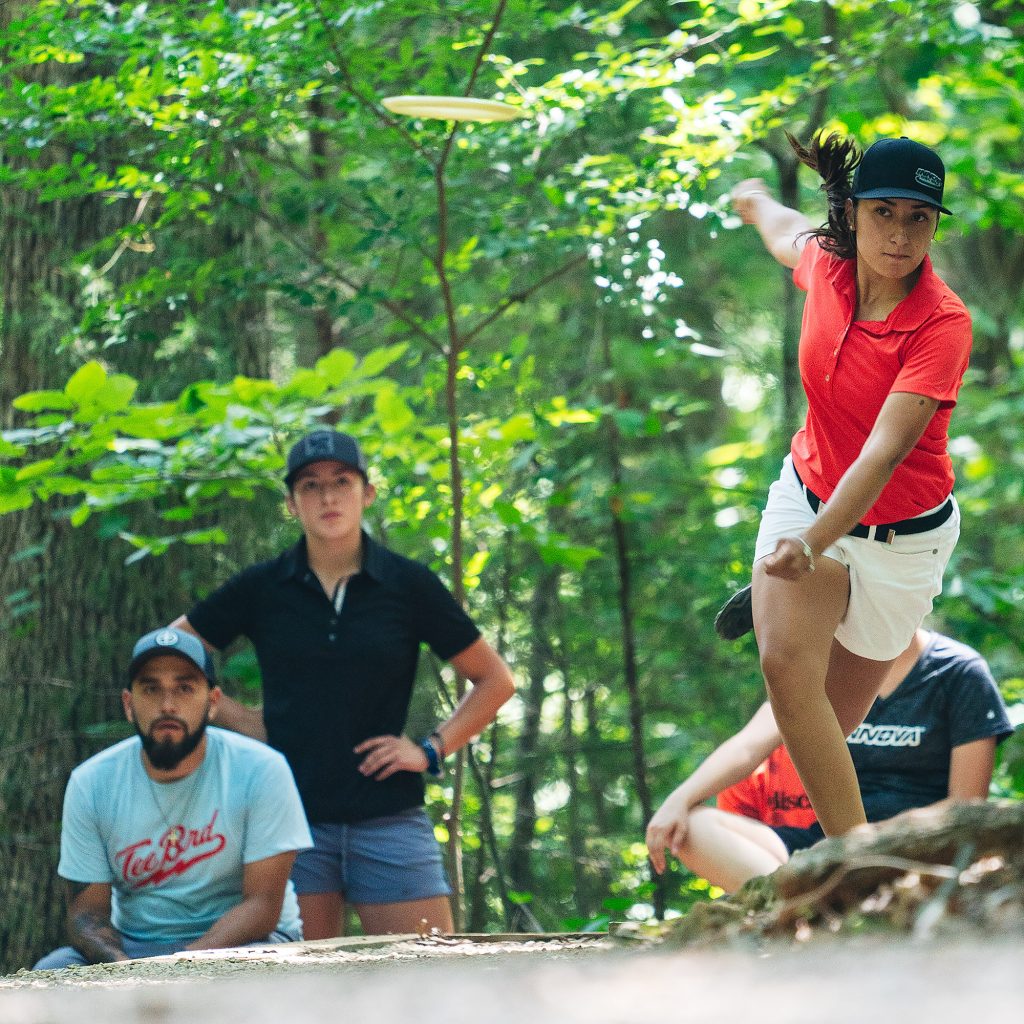 What were the primary discs in your bag during Am Worlds?

My primary disc was my Champion Thunderbird. I used it for multiple shots like both sidearm and backhand off the tee, and for upshots. Second was my Nova, which I can put on any line and know it was gonna get the job done. I did some great upshots. Third was my C-Line PD, that I used it for my distance control driver. It worked great for long tight holes.

You indicated right after the win that Am Worlds was the last amateur event for both you and Valerie. What does your tournament schedule look like for the rest of 2018?

I am looking forward to playing some of our local tournaments in Texas. Then I am going to be jumping to up to the open ranks for the start of the 2019 season.

Was this the first time you and Val competed in Advanced Women together?

At Am Worlds yes, but we have played lots of Texas tournaments and even some A and B tiers against each other.

Three Team Innova athletes are atop the Advanced Women standings going into today’s semi-final and final rounds of the Amateur World Championships Driven by Innova. @v_mandujano99 is the current Advanced Women leader, her sister @alexis_1642 is four strokes back in second, and @christinejenningsdiscgolf is nine strokes behind Alexis in fourth. Follow final day action starting at 8am ET on pdgalive.com #discgolf #innovadiscs #teaminnova

What’s it like to have both a sister and a competitor in the event?

It’s a huge blessing because I get to have both a supporter and a teacher! If it comes down to us let the best player win!

Clearly, you and Val are very close. How do you approach competition knowing you are both competing to win?

Once we hit the course it’s game on, me against the course. I wish my sister the best of luck and let the outcome be what it is. In the end we are still sisters.

Talk about the role your family plays in your game. 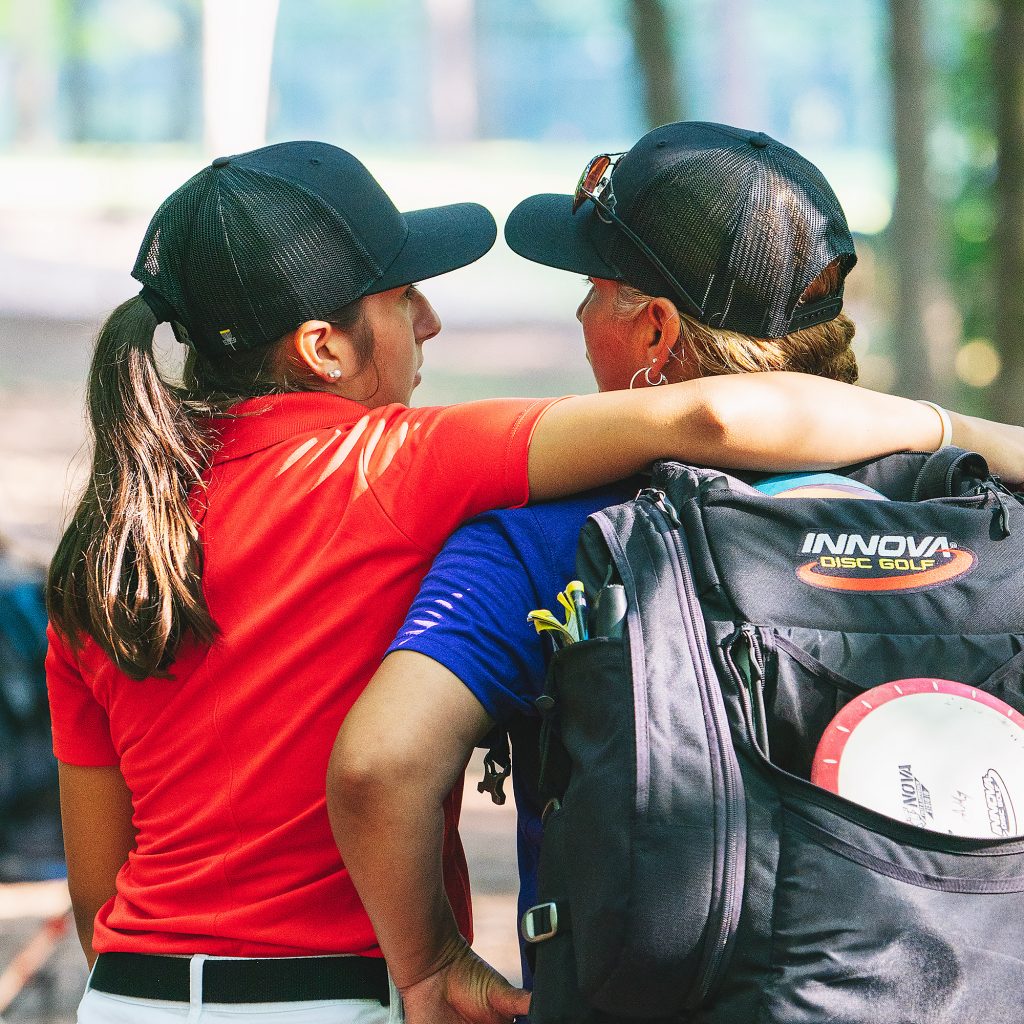 They provide us both with tremendous support, from taking us to the gym, field work, and practice rounds. But most of all loving us through our bad shots and missed putts. Valerie and I aren’t the easiest to deal with. LOL

What’s a fun fact few people might know about you?

A fun fact about me only a few people know is that I am a huge sports fan. I love my Chicago teams!

How did you discover disc golf?

My Dad heard about it first through some of his friends. One day were we were looking for something to do over the weekend and tried it.That created a spark that turned into a wildfire in our family. What started as a weekend thing quickly grew into an everyday deal.

Who do you look up to in the sport? Why?

One of the first pro players I looked up to is Paul Mcbeth. I saw how dedicated and humble he is. He’s an all around cool guy. I also look up to Bradley Williams who I just met last year. He is a quiet person, but one of the coolest and hard-working guys. Both Paul and Bradley have had a big influence on my game and why I push so hard to get better. Hopefully I can be as good as they are one day.