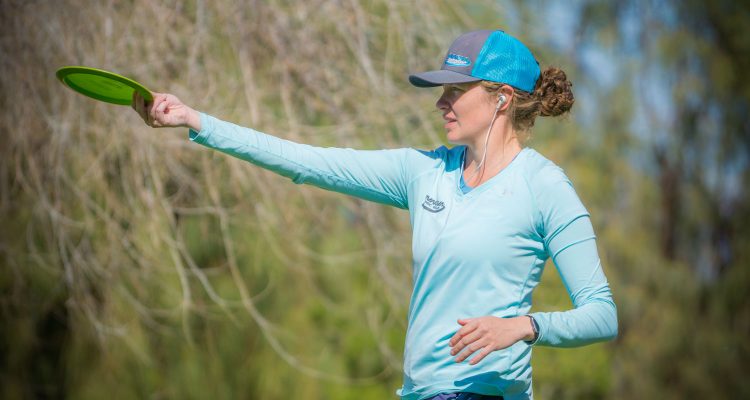 You could say Jessica Hill has found the fast track to disc golf success. After playing for a little over a year, she won the Amateur World Championships in 2015 and now, after only three years into the sport, she was recently named 2016 PDGA Pro Rookie of the Year.

It’s a pace that the 29-year-old Innova Team Member is quite pleased with. “Winning the 2015 Amateur Worlds and then following that up with Rookie of the Year was really cool and it was kind of like a nice natural progression,” said Hill, who also finished top 10 for the 2016 PDGA Pro Player of the Year award.

Last year in her first full season as pro, she played in 29 events including the Glass Blown Open, in which she surprised a lot of folks with her 9th place finish – one of her best at a big event. Hill’s weekends are full of disc golf. When she’s not competing on the National Tour, you’ll find the Jacksonville, Fla. resident finishing at or close to the top in nearby Florida or Georgia events.

One thing I appreciate about the game of disc golf is how easy it is to notice improvement. The individual nature of the sport means that if you put in the work, you get better, and you can see it in your scores.

Hill says one of her best assets is her dedication to good, focused practice, and she’s been seeing noticeable improvement because of it. “At some point that might level off, but it helps me against competitors who are more casual in their approach to the game,” said Hill. This year she’s on pace to play even more events – an accomplishment in itself considering her tight full-time work schedule in corporate finance.

There was a time when Hill, who was an avid Ultimate Frisbee player in high school and college, dismissed disc golf as a sport for old people who could no longer run. But after being properly taught how to throw and seeing that she could master the sport, she was quickly taken with it. Disc golf has now overtaken Ultimate for Hill.

Compared with the team-oriented Ultimate, where success depends on an entire team’s work ethic, how much you improve in disc golf is all up to you, said Hill. “One thing I appreciate about the game of disc golf is how easy it is to notice improvement. The individual nature of the sport means that if you put in the work, you get better, and you can see it in your scores,” said Hill, who experienced that first hand, starting at her home course. On tour, Hill has been getting use of all three versions of the Shryke, notably the Champion edition. “Like my other Shrykes it’s very controllable, but I don’t have to worry about it turning over unexpectedly if I throw it a bit too hard,” said Hill, who’s also a big believer in her Star TeeBird whenever she can’t decide what to throw.

Feeling let down from last year’s World’s performance (finished 21st), she’s looking to recapture the multi-day consistency this year that she felt during her 2015 Worlds win (winning by 30 strokes). Job one is to have a more relaxed putting mindset, she said.

Hill’s future should be fun to watch. After seeing her make so much progress after only three years, we’re excited to see what she can do with another three years. “Before I tried the Shryke, my go-to driver was the Tern. The Shryke allows me to rip on the disc a bit more without turning the disc over completely. As a result, I’ve added up to 50 feet to my longest drives just since the beginning of this season. I just played a tournament at my home course and several people asked me if I have recently added tons of distance. I was able to give an emphatic ‘yes’.”