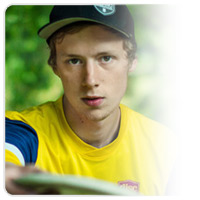 Congratulations to Simon Lizotte on an impressive win at the 2014 Glass Blown Open. Simon hails from Bremen, Germany but this year is touring the United States extensively with Discmania teammate, Avery Jenkins. So far Simon has finished no lower than 7th, quickly proving to be one of the most tenacious international players to compete full time in the US.

Make no mistake about it, Simon is no rookie on the global disc golf scene. Nicknamed “The Wunderkind”, Simon has been playing disc golf since he was 2 years old. The biggest win of his career came in 2012 at the Disc Golf European Championships. He followed that up with a very consistent 2013 season in which he earned the title of EuroTour Champion. Simon’s first win in America came last weekend at the Eagle Eye Open, a B-tier event in Georgia. Prior to that he notched top ten finishes on the PDGA National Tour; 7th place at the Memorial Championship and the 2nd place at the Texas State Championships. With results like that, big-time tournament wins are just a matter of time.

Photo courtesy of Discmania
While not a part of the PDGA National Tour, the Glass Blown Open boasts an equally impressive Open field. Simon had his hands full with US heavyweights such as Paul McBeth, Jeremy Koling, Ricky Wysocki, and Will Schusterick. Simon moved into the lead in round two posting the hot score of 49. He then pulled away in the third and final round with a solid 52. McBeth trailed Simon closely with a closing 53, but had to settle for a 2nd place tie with Jeremy Koling, a full 5 shots back of Lizotte.

Team Innova claimed a six pack of wins on the weekend as well, including Valarie Jenkins’ and Nathan Sexton’s sweep at the North Umpqua Invitational in Glide, OR. Nate’s opening round 43 set a new course record and carried a PDGA rating of 1077. He closed out the win, on his birthday no less, with a 1064-rated round of 47.

Gregg Hosfeld and Sandy Gast added a sweep of their own at the Orlando Open in Florida. Just up I-95 Brian Schweberger and Stephen Miller finished 1-2 in Men’s Open at the 2014 Tour De Richmond in Richmond, VA. And last but not least, Devin Frederick took down his fourth consecutive, Men’s Open title at the People’s Championship in Lehigh Valley, PA.

After only two years, an invite to the Georgia Team Invitational is becoming very sought-after commodity. Matt Dollar and Keith Johnson have teamed up with North Georgia Canopy Tours to offer a unique event on a beautiful and challenging course. Team “Charlottans” were honored to take home the win, one of the Spirit Awards, and both male and female MVPs. Austin Turner won Male MVP, winning all his matches and carding an ace. Also on the team were Alan Beaver and Innovites Henry Childres, Josh Day, and Matt Peckham.

We have two exciting weekends of tournament action ahead. This weekend we will watch as more than 1000 women will participate in Women’s Global Event tournaments around the world. The 2014 WGE stands to be one of the most significant occasions in the history of women’s disc golf.

Then on May 16th the National Tour returns to one of the country’s most beloved venues, DeLaveaga DGC in Santa Cruz, CA. Will Simon Lizotte maintain his momentum and grab his first NT? Will Paul McBeth win his third consecutive Masters Cup title? One thing is for sure… the 2014 tournament season is as competitive as we’ve ever seen so you better stay tuned.