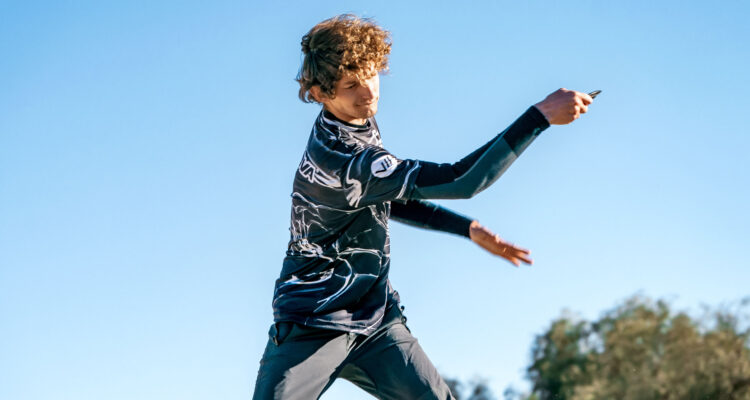 Most of us reach plateaus in our disc golf game. Your scores haven’t improved in months; your max distance has stagnated and your accuracy isn’t picking up any of the slack. You probably struggle with one or more of the following common throwing errors. We’ll look at how to identify these errors in your game and provide some quick tips to help correct them.

Off-axis torque is a common throwing error that limits potential distance and leads to inconsistent flight paths. Off-axis torque happens when a force is applied to the disc that is not on the angle or in the direction of intended release. For example, if you roll your wrist at the end of a shot meant to be thrown on a hyzer angle, that will create flutter. You are robbing the disc of spin and forward momentum and are ultimately limiting your potential for accurate distance.

To help lessen off-axis torque, focus on your follow through. Even after the disc leaves your hand, continue your arm swing on the same line as the drive. When throwing a hyzer, that means your follow through continues upwards, with your hand ultimately finishing higher than your shoulder.

Rounding is common to newer players, but is a throwing error that can affect anyone. Rounding occurs when a player pulls the disc on a curve instead of in a straight line as they drive. Usually this starts with a reach back that happens around the body instead of straight back along the intended line of release. Rounding exaggerates the impacts of early and late releases. For a right-handed backhand player who is rounding, an early release will cause the disc to fly hard left and into the ground; a late release will result in a shanked shot to the right called a Griplock. If instead the player pulled the disc in a straight line along the intended line of release, an early release would result in a shorter drive and a late release a longer drive, but both in the direction of the target.

To help fix rounding, place an object such as a disc on the back left side of the tee pad before you throw. As you reach back, try to reach towards that disc on the tee. This will help prevent reaching back around your body and in turn will keep your throwing motion in a straighter line.

Focusing on Power Instead of Technique

Many players find that if they try to throw at 50% power, the shot ends up going just as far as when they try to throw at full power, but with more accuracy. This is because timing, not power, is the most crucial element to a great drive. Trying to increase power can easily result in sloppy timing. If your timing is off, much of your expended energy fails to get transferred into the disc. A great throw involves syncing the legs, hips, core, and upper body. If you overpower the disc, you will lose the connection between these points.

To fix this problem, slow down your throw. First, throw at just 25% power with good timing. Then increase power to the point where you notice your accuracy start to suffer. If 50% is the max power you can put on the disc before losing accuracy, 50% is as hard as you should try to throw on the course. With more practice, you will be able to add more power, while maintaining good timing.

Beginners often try to muscle through the drive using as much arm power as they can. This can lead to an “all arm throw.” As we discussed in the section on throwing with too much power, proper disc golf form involves good timing between the lower body, core, and upper body. In the all arm throw, the player is not thinking about using their lower body or core at all. This leads to a drive that is less accurate, has less distance, and has a greater chance of resulting in injury. Like Dave Dunipace, Innova Co-founder and Disc Designer, says in his “Tip of the Whip” video, there are several levers that need to be wound up in a proper disc golf throw.

To fix the all arm throw, think about your hips. Hip rotation is where much of the power in a great drive comes from. If you think more about driving with a powerful hip rotation instead of a powerful pull of the arm, you will increase distance and lessen the risk of injury.

Achieving the proper nose angle can be one of the hardest things for new players, especially those transitioning from other disc sports. For distance shots, you need to keep the nose of the disc pointed downward as you release. Discs thrown with the nose up will travel less far and will hyzer out early. If you can throw 300 feet with the nose up, the same shot would travel 350+ with a small adjustment to the nose angle.

The best way to make sure your disc comes out with the nose down is to simply over-exaggerate the nose down angle in your hand before you start the throw. This may require a slight adjustment to your grip. With time, you can use varying nose angles as a tool to help you control distance.

Throwing a Disc That’s Too Fast

Likely the number one most common mistake that beginners make is throwing a disc that is too fast and too overstable for their armspeed. Newer players hear “faster disc” and assume that means “farther flying disc.” While with proper form and adequate armspeed, faster discs do tend to go farther, with incorrect form or insufficient speed, High-speed Drivers burn to the left and straight into the ground. Gregg Barsby tells us that, “Most high-speed discs will all do the exact same thing for a new player… fade hard. Learning the 7-9 speed drivers will make the transition to 12-14 speed stuff a lot easier.”

With that tip, the fix here is clear. Learn how to throw Putters and Midranges first. Once you feel comfortable with these lower speed discs, move on to Fairway Drivers. Do not worry about throwing High-speed Drivers until you’ve mastered your Putters, Midranges, and Fairways.