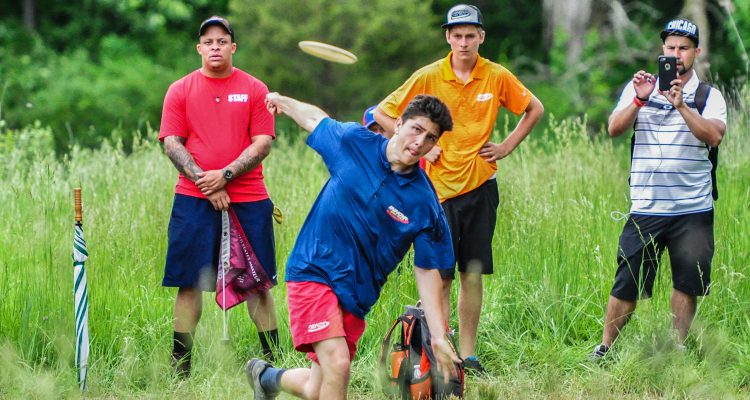 This time last year, Anthony Barela, Izak McDonald, and Matt Kashima were slugging it out for the honor of being crowned the 2015 US Amateur Disc Golf Champion. Barela would ultimately prevail, and then go on to enjoy a fantastic tournament season which also included the Amateur World Championship title. Barela has since turned pro; so with “AB” no longer a factor in the US Amateur equation, it was time to see which of the country’s top amateur golfers were prepared to take his place.

Three of Team Innova’s young guns wasted no time staking their claim for the 2016 US Amateur Championship title. Gavin Rathbun, Adam Hammes, and Izak McDonald marched quickly to the top of the leader board where they would remain throughout the weekend. They each averaged 1005-rated golf over the event’s three rounds. As a result, the trio was deadlocked at an impressive, 18 under par as the final round came to a close.

The weather conditions had been ideal on Friday and Saturday. That all changed on Sunday morning however, as wind and rain moved in and created some additional challenges. “It rained off and on all day, but it only rained hard on our group once – for about three minutes”, Rathbun said. “But it poured, and turned everything into a muddy mess, especially the tees”, he added.

To settle the tie Rathbun, Hammes, and McDonald were directed to Hole 1 for a sudden death playoff. The slippery conditions definitely favored Rathbun. Gavin had been relying mainly on his forehand for drives, which minimized his run up without sacrificing much power. As a result, Gavin parked the 447’ downhill shot to grab the lone deuce and the tournament win.

“It was awesome playing with Izak and Adam”, Gavin said. “I have been friends with Izak since I first started playing. Adam and I met in 2014 when we played together at Am Worlds”, he added. Hammes finished 2nd in Junior Boys 15 and under that year. Rathbun finished just behind him in 4th, so these two are no strangers either.

I knew coming into the event that Izak and Adam would be tough to beat. Izak and I talked about it before the tournament and set a goal of grabbing the top spots. That’s pretty much what we did.
– Gavin Rathbun, Team Innova

For Rathbun the effort to win 2016 USADGC started well before this weekend. He knew to get past the game’s top advanced men he would have to put in the work. “I have never practiced so hard in my entire life to get ready for Am Nats”, said Rathbun. When asked how much of that time was spent putting he replied, “About 95%. The other 5% was spent dialing in my forehand”, he said.

As far as what’s in Rathbun’s bag, Gavin uses the Pro KC Aviar for all of his putts and short approach shots. For medium range shots he uses the KC Pro Roc. For this weekend’s event his go-to drivers were the Star Destroyer, Champion Wraith, and Discmania’s C-Line PD2 . Those discs will be getting some air time today too. Gavin is on his way to Lockport, IL today where we will join Izak and the McDonald family for a casual round, or three.

Rathbun will then turn his sights to the Sinnissippi Open in Sterling, IL. After that his focus will be on the 2016 PDGA Amateur World Championships in Madison, WI. One of his other goals for this year is to get his throwing shoulder back up to full strength. Rathbun is excited about his potential, especially when he gets totally healthy.

Part of Rathbun’s success has been the help from others around him. “I would like to thank my mom and Craig for all of their support. I would also like to thank Kona Panis who caddied for me all week. Kona kept my head in the right place the whole time (laughs) which is not always an easy thing to do.”

This win will certainly give Rathbun confidence heading into Am Worlds. He will need it, because the competition will be every bit as fierce when everyone rolls into Madison next month.

Congratulations to Innova Junior Team member, Anthony Barela, on his record-breaking performance at the 2015...More