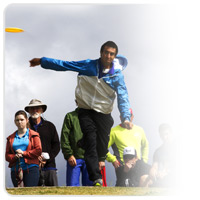 Share it !
While these guys were out sloshing around dodging bolts of lightning, Ken Climo, Patrick Brown, and George Smith had a battle going of their own in Masters. Climo was able to hold off his fellow teammates and defend his Masters title from 2013. Valarie Jenkins also had a solid weekend, finishing third in Women’s Open. Joe Mela took home second place in Men’s Grandmasters, finishing right behind Memorial tournament director, Dan Ginnelly. Great job, Dan! On the amateur side of the Memorial, Junior Team member Anthony Barela shot the best opening round and never looked back. Anthony was one of only two competitors in the 129-person field to finish under par. He went on to win by three over Alaska’s James Beckner.

McBeth stayed with Barela and his family during the event. “The kid never stopped playing the whole time. Before his rounds, after his rounds… it was fun to watch”, said Paul. McBeth was also excited to see one of Anthony’s junior teammates, Jacob Courtis, come out and caddy for Anthony. “The camaraderie between them was awesome.”

Back to the East

Team members were bonding in South Carolina and Virginia as well. The Earlewood Classic is one of South Carolina’s beloved events that is almost impossible to get into. If you are slow on the registration draw, you’re out. In Men’s Open this year Matt Dollar managed to hold off teammate Josh Childs for the win. In Masters it was Innova’s Creative Director, Matt Peckham who held off Kevin McCoy and Hall of Famer Alan Beaver to secure his third win of 2014 and his 5th masters win in a row. Peckham credits the addition of the Nova putter to his bag.

At the Loriella Challenge in Spotsylvania, VA, Terry Gallops needed extra innings to get past teammate Stephen Miller. Matt Kashima, also part of the Innova Junior Team, finished tied for fourth only three shots from the lead.