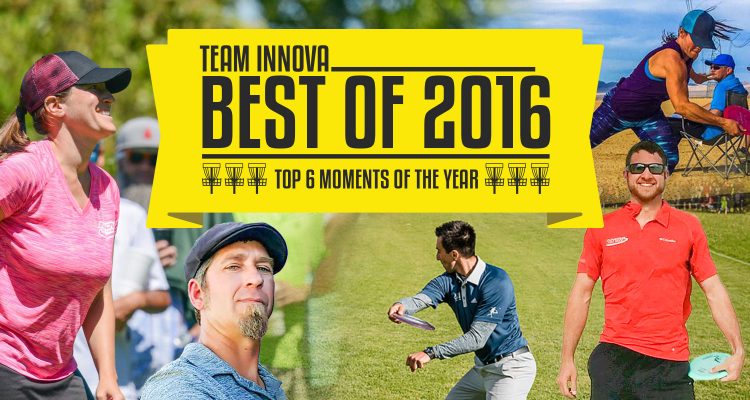 What do you think Team Innova’s Top 6 moments were on tour this past year? There are lots to choose from. Team Innova leaves its mark on every week, with many performances going viral. See if your predictions match up with what we’ve got. Starting with #6, here’s a countdown of the Top 6 for 2016. At the Glass Blown Open, Cam Todd proved that you don’t have to be a 20-something to win on the PDGA Tour. At 42-years young, the 2001 World Champion took down the game’s best by one throw amid scorching temperatures and won over many fans in the process. Down five shots to Ricky Wysocki at the beginning of the third and final round, Paul McBeth clicked into his familiar Beast Mode and dismantled the par-64 Beast Course with a 53 (-11), leaving the rest of the field behind. Becoming the World’s longest throwing woman wasn’t just something that fell into Jennifer Allen’s lap. Training intensely prior to the High Desert Distance Challenge, Allen was able to set a new World Flying Disc Federation World Record for Women’s Open Outdoor Distance. Jenn crushed a Star Wraith a whopping 569-feet, a mark she believes she can beat in 2017.

Landing himself on ESPN’s Top 10 highlight segment for the second time in two years, Philo Brathwaite exposed countless people worldwide to disc golf when he holed-out after only two shots on the 850-foot par 5 using a 167-gram Star Destroyer. ‘How is anyone going to top that?’ – is what many must have thought after David Wiggins Jr. reclaimed the World Flying Disc Federation Open Class World Record for Outdoor Distance. During the High Desert Distance Challenge, Wiggins took advantage of perfect conditions to become the first competitor in history to break the 1000-foot mark. David’s distance disc of choice this year was the R-Pro Boss. Her first World title since 2009, Valarie Jenkins proved she’s still a force to be reckoned with. Despite being down early and for most of the tournament, Val’s never-give-up spirit propelled her to one the most memorable wins of her amazing career.