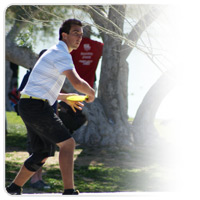 Paul McBeth is a ferocious competitor. If you think you are as good as he is, well… you might want to think again. On the final day of the Memorial Championship, Paul needed to deliver a spectacular performance just to have a shot at catching his former teammate and tournament leader, Will Schusterick. Will began the day 6 shots ahead of Paul thanks in part to an incredible, second round 42 at Fountain Hills that propelled him into the lead.

Paul came out firing in round 4 with birdies on the first 8 holes. Word spread quickly throughout the course that the “McBeast” was on fire. Paul missed a makeable birdie putt on Hole 9, which would prove to be the only blem on his card. He was not phased by the miss. Paul went on to birdie the entire back nine and posted one of the greatest rounds in disc golf history; a 39 at Fountain Hills. (Unofficially PDGA Rated 1126)

Schusterick carded a final round 43. However he failed to total his scorecard which resulted in a two shot penalty. Just like that, Paul and Will found themselves tied. Both players were stunned. The unbelievable news spread like wildfire and within moments, spectators were running to Hole 1 to witness one of the most dramatic endings in disc golf history.

McBeth was first to throw in the playoff as he had the better final round score. He landed safely in bounds about 45 feet deep and right of the pin. Will answered with a gorgeous shot that let him with a 10-footer at best. Advantage Will. Paul’s putt fell short giving Will a tap in for the win. It was an amazing finish that will be talked about for years to come.

Earlier in the day, Ken Climo won his first ever Memorial Championship competing in the Master’s Division. Ken seems to have regained that same competitive fire that propelled him to 12 World Championship titles and the PDGA Masters World title in 2012. Patrick Brown struggled in the final round and finished in seventh in Masters, and Chris Brophy took 11th.

Defending women’s Memorial Champion Valarie Jenkins sealed up a second place finish this year, while first-timer McKayla Thomas had a strong showing at her first Memorial with a sixth place finish.