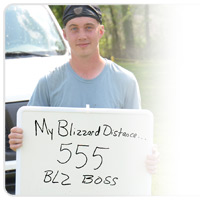 A shower of Blizzards and other Innova plastic stormed down upon the Big Gun distance competition on Thursday, prior to the Amateur Championships at Bowling Green, KY. Michael Walters (seen at left) threw 555 feet with a Blizzard Boss to qualify for the finals. It was the longest recorded throw of the day. After a full day of players chucking plastic – with some staying for hours trying to get the big one – Ann Arbor, Mich. resident Tony Mitchell emerged from the finals as the Big Gun with a 540-foot drive.

Later at the tournament check-in at WahBah’s restaurant, Mitchell said he appreciated the pats on the back from fellow competitors.

“Everybody was really happy for me. It was really cool,” said Mitchell, 33, who came in second in the contest two years ago.

Throughout the day players filed in and out of the free distance expo situated at Phil Moore Park’s 800-foot hole 2. Available to the players were all of Innova’s latest Blizzard discs including the soon to be released Dominator.

Mitchell’s winning drive came from his own 175-gram Star Vulcan, but he qualified for the finals by throwing a Blizzard Katana about 520 feet. After throwing several Blizzards, Mitchell plans on buying a few and working them into his bag. Those discs will probably accompany a few of the 20 Tony Mitchell custom stamped Innova discs as his first prize.

Nick Davis, who had some early long drives, said he had good feelings from the Blizzard plastic he’s thrown before.

“I like it. I think it gives you more distance for less effort,” said Davis, 28, of Murfreesboro, Tenn., who’s been playing for about a year.

Kong Carlin, 36, of Lansing, Mich., was one of those players who couldn’t get enough of the distance throwing. “Oh, what’s one more,” he was overheard saying before another big drive. “How often do you get the chance to rip back and throw it?” said a smiling Carlin.

03.03.14 This time last year Paul McBeth was celebrating his dramatic final round at the...More