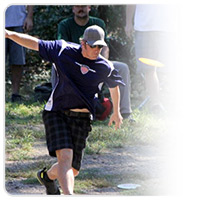 Matt Dollar picked up his 12th win of the year at this weekend’s Gwinnett County Open. Dollar was victorious last weekend as well at the Terrapin Turtle Toss, which also took place in Matt’s home state of Georgia. Matt wasted no time getting ahead of the field blasting opening rounds of 43 and 40. Teammates James Cole (2nd place) and Josh Childs (5th place) played well, but it would prove to be Dollar’s weekend once more as he cruised home to win by eight. Paul McBeth is back in Florida where he will spend the winter months training for the 2014 touring season. McBeth motored up to Clearwater this weekend to take on Ken Climo in his backyard, and a stout line up of other regional pros at the Coachman Classic. Paul earned a five shot lead in round one, and then posted a 55 in round two which proved to be the weekend’s best. Paul finished the deal with a 58 in the third and final round to secure the win. Climo finished tied for 4th Gainesville’s Garrett Gurthie. Pam Reineke edged out teammate Sandy Gast to win the pro women’s division at Coachman. Reineke grabbed a four shot lead of her own in round one and did not look back. Pam and Sandy are no strangers on the golf course. The pair have been competing fiercely since they shared the PDGA Rookie of the Year award in 1992. Both have enjoyed excellent careers that include the 2013 US Women’s Grandmaster title for Pam, and the 2008 Masters World title for Pam. Wins in Florida must generally run through one of these ladies, if not both.