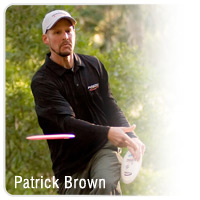 Team Innova takes Open, Womens, & Masters at the Beaver State Fling
It was a weekend of repeats in the top divisions, as Paul McBeth, Valarie Jenkins and Patrick Brown all added another NT victory to their belt for the 2011 season. Patrick Brown has been on a hot streak with 3 NT victories in a row, The Brent Hambrick, Kansas City, and now, the Beaver State Fling. He’ll be spending the upcoming month in home territory prepping for the World Championships on his home turf.

McBeth Pulls Off a Stunner

Along with Patrick’s win, Innova took the top spots in the Open and Open Womens divisions. The Beaver State Fling is a top draw on the National Tour, perhaps because of the gorgeous course among the lush forests just south of Portland in Estacada, OR. While Dave Feldberg held a 2-stroke lead after three rounds of play, down the stretch it was Paul McBeth climbing from 4th place to claim a second NT win of the year. Paul saved his best for last, firing a final round 49 that proved to be the weekend’s top performance. This 1080-rated round included a 35-foot birdie putt on the 72nd hole to seal the deal. Dave Feldberg, who lead going into the final round, finished in a tie for second just one shot back. Other top finishers were Will Schusterick (4th), Kyle Crabtree (5th), Josh Anthon (8), and then Tim Skellenger and Matt Orum who tied for ninth.

Valarie Jenkins picked up her 8th win of the season, earning the Open Women’s title quite comfortably. Val lead wire-to-wire and finished a full 11 shots ahead of the pack. Des Reading finished in fourth.

Across the country in our nation’s first state, the Delaware Disc Golf Challenge featured a showdown between Steve Brinster and Mike Moser. Brinster lead wire-to-wire finishing 5 shots clear of second. Mike Moser wound up third. Joe Mela was tops in Masters thanks in part to a hot second round. Joe’s 67 propelled him into a lead he would not surrender, earning him his third win of the year. J.D. Ramirez continued his hot streak at the Wilco Summer Classic in Leander, TX. J.D. shot a 1053 rated second round to force a playoff and went on to drain a 60 foot putt for birdie on hole 1 to take the win.
Share it !