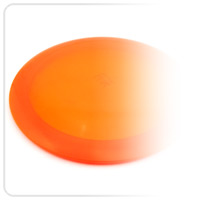 Our latest prototype is now PDGA approved.
The Krait is a fast, speed 11 distance driver which falls between the Archon and the Wraith on the stability scale. The Krait’s unique ability to achieve a mellow low speed fade, while simultaneously resisting high speed turn makes it a perfect choice for long range shot shaping off the tee.

Power players will be able to use the Krait as a finesse driver or long range roller. Moderate arm speed produces a straight, long drive. Although the Krait doesn’t have a lot of fade, it’s still a very effective driver in windy conditions. Sidearm throwers will appreciate the resistance to turn combined with a slow fade at the end of the flight. Initial flight numbers [11|5|-1|2]
{yoogallery src=[/images/FParticles/krait2] height=[115] width=[115]}

The Krait will be released as a CFR fundrasing disc for the US Masters.
Share it !