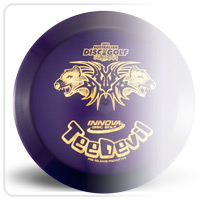 CFR TeeDevil
The TeeDevil was designed to give the thrower huge distance along with complete control. The increased glide and decreased fade lead to an easily controlled distance driver that really rips! The Champion TeeDevil is a fundraiser for the 2011 Australian Disc Golf Championships to be held Nov. 25th-27th in Austins Ferry, Tasmania.
Learn more at www.adgc.com.au Champion Dart
The Dart is a small diameter putter with a straight flight. The Dart is especially good for long range putts and go-for shots. It has a flight similar to our Aviar Putt & Approach but has less low speed fade and a little more range. The nice thing about this disc, besides the improved grip, is that it holds the line for a long time. Now available in durable Champion plastic.

Pro Vulcan
The Vulcan was designed for less powerful players that want to throw the shots of their dreams. Similar in flight to our Katana with less low speed fade. Now available in Pro plastic for even MORE glide! These are fun and easy to for just about anyone to throw.

EchoStar Archon
The Archon is a Speed 11 Distance Driver that blends the graceful long turn of the Katana with the smooth fade of a Wraith. It has been described as a longer Valkyrie. Now available in a grippy blend of EchoStar plastic.

Remember to call your local dealers for exact delivery dates!
Share it !