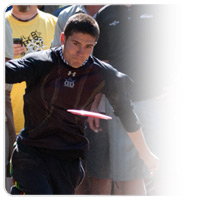 It’s May, and we are heading into the heart of the tour schedule. Innova has won 9 out of 11 of the top tournaments so far in 2012. This week Nikko Locastro took the trophy in his old stomping grounds of St. Louis. Dave Feldberg traveled to Texas for another A-Tier, almost making the Innova record 10 of 11 on the year.

Nikko’s recovery from back pain seems to be progressing, as he was able to defend as three-time St. Louis Open champion. He withdrew from the SOKY Championships two weeks ago. This week Nikko was back to full strength and slipped past Will Schusterick with a third round score of 45. Nikko added two more strokes during the finals to win by 3. Paul Ulibarri finished in 4th.

While his Non-Stop Disc Golf Tour teammates were handling business in Missouri, Dave Feldberg zipped down to Huntsville, Texas for the other Pro A-tier of the week, the HEIST at Shawshank. Feldberg let several opportunities to win slip him by and as a result, found himself in a playoff with Bradley Williams. “Brad played great and on the fourth hole he got me. He earned it.” Dave said. Dixon Jowers finished 4th. The HEIST also kicked off the touring season for Jay Reading and Des Reading. Des was tops among the pro ladies, while Jay finished 4th in Masters.

David Wiggins Jr. proved that there is more to his game than just monster distance. He blistered Cedarock Park in Burlington, NC in route to victory at the Alamance County Pro-Am. Teammates Brian Schweberger and Terry Gallops were hot on David’s heels, as were NC heavyweights Michael Johansen, and 2001 World Champion Cam Todd. It was a classic North Carolina slugfest. This time it was young Wiggins who delivered the knockout punch.

When Paul McBeth says someone played “GOOD!”, it means something special. This weekend in Miami, “Ricky Wysocki played GOOD!” In this case that something special meant an -8 opening round, followed by a -9 second, to take a commanding lead over Ken Climo and Paul McBeth heading into Sunday. Even though Climo and McBeth were satisfied with their Sunday performances, neither one could reel Ricky all the way back in. The trio again claimed the top 3 spots, just as they did last week in Clearwater.

And yes, even more great results…

Ray Johnson won the Duel in Dayton, Nevada. J.D. Ramirez went Into the Lion’s Den in Temple, TX, and clawed his way to victory. Ziggy Bierekoven won the Chain Reaction in Holly, MI. Team Champion member Kyle Crabtree was in Walla Walla, WA for the Aloha Sushi Classic. He finished second, missing the win by a single throw. Joe Mela also picked up a second place finish at the People’s Championship in Pennsylvania.