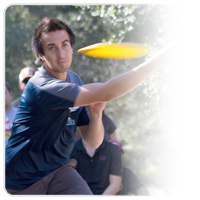 Paul McBeth opens the 2013 PDGA touring season with a victory at the 35th Wintertime Open. This event is hosted on the historic Oak Grove Disc Golf Course in Pasadena, California. On Saturday, the players enjoyed beautiful sunshine and a high of 82 degrees.

After the first two rounds on Saturday, McBeth was only three strokes off the lead. However, on Sunday morning, Paul set another Oak Grove course record, shooting a blistering 48 on the par 61 Wintertime Open layout. Paul actually set the previous course record of 50 at last year’s WO. The record setting third round propelled Paul to first place heading into the Final Nine. Paul then shot an amazing six down to win the event by 8 strokes over the second place finisher. Team member Philo Brathwaite finished 5th in the field of 40. In Masters, Chris Brophy took top honors. Congratulations to INNOVA West staff members Rob Wilson and Suzette Simons for winning the Men’s and Women’s Grandmaster divisions.

On the East coast, The Spike Hyzer tour was heating up cooling off with an arctic blast of weather descending on the Carolinas. At Swinging DBs in Moncure, NC, INNOVA Team members David Wiggins and Brian Schweberger battled not just the course and players, but also the elements! Rain, wind and snow on Saturday forced event organizers to cancel the second round. On Sunday, play resumed on a fresh blanket of snow. David Wiggins battled for the win in the Open division, while Schweb won the Masters, edging out teammate Barry Schultz.

Meanwhile, in South Carolina: South East Park in Columbia held its first PDGA tournament Saturday despite having tees installed as recently as Friday. The crazy weather for this event included frigid temps, rain, sleet, ice, wind, and snow… even a rainbow! Mother nature wasn’t enough to keep (INNOVA East staffer) Henry Childres from taking the win with Matt Peckham (also staff) just one stroke back in second. The course is a great new addition to Columbia’s disc golf culture.