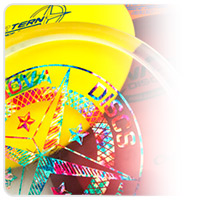 Ready to get your Summer Game on with 4 new Innova Discs?
Win our new releases here!

The Mako3 is the newest version of the remarkably straight flying Innova Mako. This mid-Range disc is the perfect solution for anyone who wants a straight flyer with very limited fade. Players will like the Mako3’s glide for added distance. The easy to grip and release rim offers clean consistent releases. The Mako3 is a great disc for one disc rounds.

The Tern has been turning heads out on the course. This newly released driver is now available in Star plastic with a production stamp. The Star Tern offers a bit more high speed turn than the Champion model making this disc easier to throw for less powerful arms.

The Mamba was designed to give maximum distance for minimal effort. It has more high speed turn than any of our long range drivers, so throwing into a headwind is not recommended. For those with less driving speed, the Mamba will add distance. For the medium armed crowd, it will shape long lines for turnovers and straight shots, as well as hyzer flips and even big rolls.

The TL is the brother of the reliable TeeBird. This disc has the same great speed and glide as the Teebird, but is straighter flying with less fade at the end of the flight. If you’re looking for an accurate, straight flying fairway driver, the TL is the answer. Four lucky fans will each win a 1st Run Champion Mako3, a Star Tern a Champion TL & a Star Mamba! Second place prizes of 20,000 points at the Innova Factory Store will be awarded to five runners up. For your chance to win, use the widget below with your favorite social network (or all three) to enter. Entry into the contest ends on 6/18/2013 at 12:01am Pacific Time. This post will be updated with the winners on the morning of 6/18/2013. If you’re not a lucky winner, don’t worry! These models are headed around the world and will be available through Innova retailers shortly. Contact your favorite retailer for exact delivery dates. Good Luck Everyone!

Congratulations to our Grand Prize winners! Each of these lucky fans will receive all four of our new releases!

Runners Up Win 20K points at the Innova Factory Store!