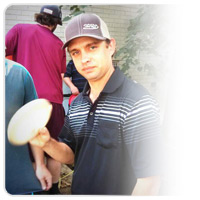 Share it !
His biggest supporter, Lesli, knew full well the significance of his win. At each of Brinster’s past USDGC’s, she’s hoped it would be his time. It finally happened, it just took several tries.“I couldn’t be happier for him. He works so hard on and off the course,” said Lesli Brinster.

photo by Chad Corduroy LeFevre
Though Paul McBeth may not have collected his Grand Slam, he did collect a new course record of 52 (1094-rated), thanks to a new approach to the course that went straight at its jugular. 53 was the previous record held by Schusterick, Josh Anthon, Jussi Meresmaa and Brinster.
“Now that I know how to play this course, it’s kept in the back of my mind to stay aggressive out here,” said McBeth, indicating he was ready for another crack at Winthrop.

Playing in a handful of masters events this year, Schultz proved this week he can still hang with anybody. “This course doesn’t really know how old you are when the disc is in the air or when it’s hitting the chains,” said Schultz. Soon after completing the final hole Brinster thanked all of his supporters for rooting for him all of these years. Many of the tour players gathered around seemed to really appreciate the significance of the moment for Brinster. “It was great to see Steve Brinster win. He’s a true competitor,” said Doss.