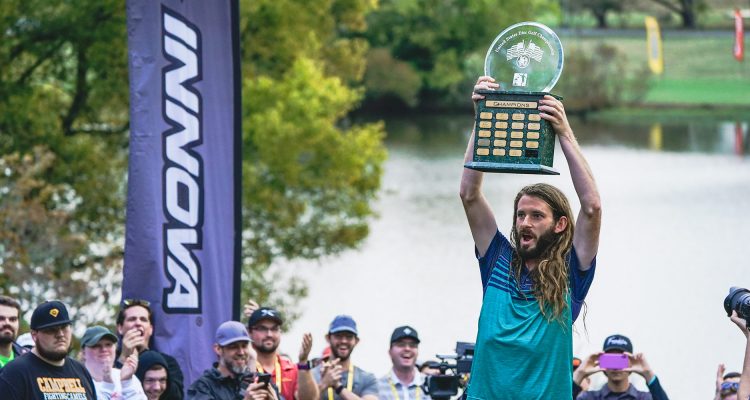 After three days of intense South Carolina heat and fierce competition in the Winthop arena, there was a change in the air going into the final round of the 2019 United States Disc Golf Championship. The temperature was cool, spectators were everywhere, and after three rounds of consistent play, James Conrad joined the top card with a two-stroke lead over the field.

The athlete storylines this USDGC seemed improbable—Nikko Locastro’s hole 13 albatross, Paul McBeth’s absence from contention, Eagle McMahon’s hand injury. One thing was not… James’ consistent play. He shot a combined -3 on the new holes, 3 and 4, for the week and only twice carded a score greater than bogey.

James played a steady fourth round heading into the dramatic hole 17. James missed the island on his first attempt. Then again. The gallery held its collective breath on his third attempt until a roar emerged as his disc fell safely on the green. He carded his worst score on the penultimate hole, a quadruple bogey.

The par four hole 18 was more challenging this year with a tighter fairway off the tee. James carded a double-bogey, his second worst score of the event, during round one. If James could card a par, The Championship was his. His drive landed center cut fairway and his upshot was atop the hill, 75 feet away from the basket. The gallery was silent until James calmly dropped his approach shot within 20 feet. The cheers began popping off as the other players tapped in and James approached his putt. Staring straight into the chains with Winthrop Lake directly behind, James lined up his putt and sent his JC Aviar sailing true as it landed softly in the basket. James Conrad became the 2019 United States Disc Golf Champion. His arms reached for the sky, champagne erupted and friends smothered him.

Other solid performances include 2016 USDGC Champion and teammate Jeremy Koling who finished in a tie for second place, carding a -6. Philo Brathwaite also finished -6 for the round, moving up eight spots to finish in sixth place. Finally, Logan Bowers shot the hot round on the final day with a -8.