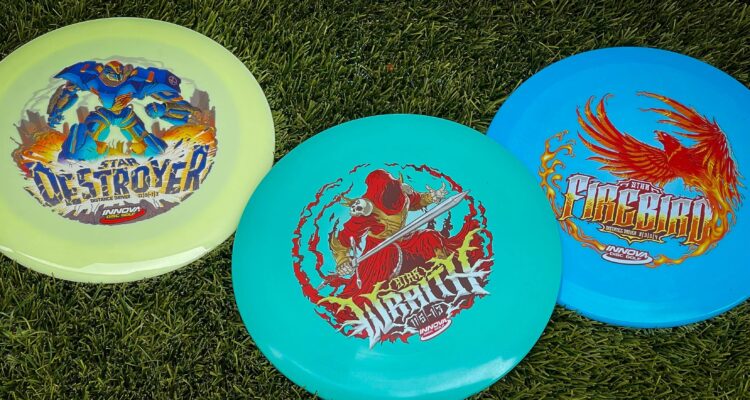 On August 16, 2003, Juliana Korver won her fifth FPO Disc Golf World Championship in Flagstaff, Arizona. With that win she tied for the most ever World Championship titles held by a female disc golfer, a record she is still tied for today. Watch Juliana this weekend at the Des Moines Challenge played at Pickard Park, JK’s own design. She won the event in 1997. This weekend, 25 years later, she is still shredding it in the Open Division.

Check out Innova’s latest Full Color art on the Star Destroyer, Star Wraith, and Star Firebird. It is the highest definition color we have ever had on a disc without compromising the feel of Star plastic. With UV-protected ink, the image remains vibrant throw after throw. Get yours at the Innova Factory Store. Wholesale customers stay tuned, these discs will be available soon.

Team Innova had a strong showing last weekend at the Ledgestone Insurance Open. Anthony Barela kept himself in close contention for the win throughout all four rounds. He finished in 4th place, tying his best ever result at an Elite Series event. Calvin Heimburg shot a new course record nine down at Northwood Black, likely the hardest course on tour. And Ohn Scoggins took second place in the FPO, leading the event in Circle 1 putting, Circle 2 putting, Strokes Gained Putting, and Scramble percentage.

Check back in next week for an update on the Des Moines Challenge, new product releases from Innova, and more!