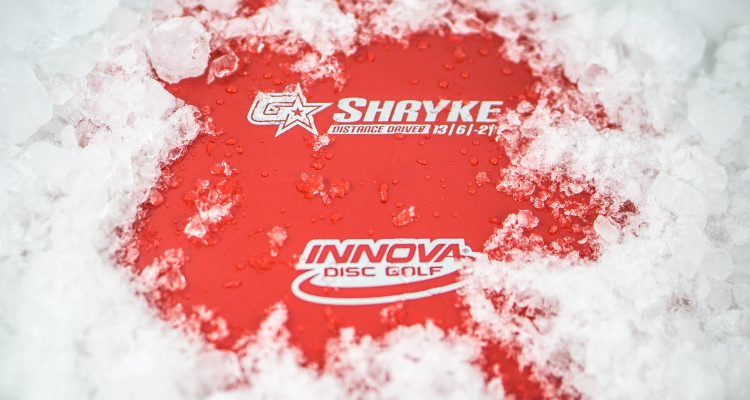 Winter is coming. For some that’s an ominous warning heard often on HBO. For disc golfers, it’s an opportunity to convert your bag for the frosty months ahead. But what are the best discs for winter?
How do you adjust your disc inventory when those go-to summer discs no longer have that grippy, flexy feel in the cold? Well, Innova has several options including GStar plastic, the grippier, flexier cousin of the premium Star plastic – with its same durability.

Why is GStar ideal for disc golf in the cold? The man in charge of disc production at Innova knows why. Kobyn Dunipace, having grown up around injection molding machines, says GStar provides excellent grip even when the colder temps and lower humidity make hands dry and less able to apply a firm grip.
“The more friction you can get, the more power you’ll be able to transfer to the disc. So, if you start with a plastic that is more flexible you should be able to play as you normally do without having to change your form to compensate,” said Dunipace, son of Innova co-founder and disc inventor Dave Dunipace.

I have definitely never seen a disc made in GStar break and I’ve had them thrown at baskets and walls by disc golf world champions at point blank range after having been frozen.
– Kobyn Dunipace

Leatherman relies on GStar in the cold Already a fan of GStar plastic during the warm months, 2015 US Women’s Disc Golf Champ Hannah Leatherman, relies heavily on her GStar Destroyer, TeeBird, and Leopard during the cold months – a time of the year she’s not a fan of.
Wintering in Florida she doesn’t face the harsh temps of her home of Pennsylvania, but when she does face the cold her GStar and her Glow DX discs give her the grip she wants without turning too stiff.
“As long as I can keep my hands and body warm, I can trust my GStar and Glow DX discs to do what they are supposed to do despite the cold temperature,” said Leatherman. Another plus for Glow DX is that it’s easier to find during those winter evenings when the sun sets earlier. GStar and Glow DX aren’t Innova’s only options when it comes to the best discs for winter. Driver Pro plastic is the great compromise when it comes to durability and grip at an affordable price. Plus, the plastic wears-in nicely for the desired flight, says Dunipace. And, don’t forget about the super grippy XT plastic, the gummy JK Aviar putter, or soft R-Pro models. “R-Pro is great for the winter because it feels like regular DX when the temperatures drop,” said pro disc golfer Alex Geisinger, who hails from the frigid state of Minnesota.

In past winters, Geisinger said he’s utilized many of Innova’s winter plastics, along with softer Star plastic. This winter, the 2015 US Distance Champ is looking forward to outfitting much of his bag with GStar. “I’m excited to give the GStar plastic a go this winter. I think it will be the perfect blend for the cold weather,” said Geisinger, who’s generally up for a cold round as long as it’s above zero.

Don’t let the dropping temperatures raise your scores on the course, update your bag with Innova’s cold weather plastics.

Winter is a great season for disc golf. You heard that right: Walking from hole...More