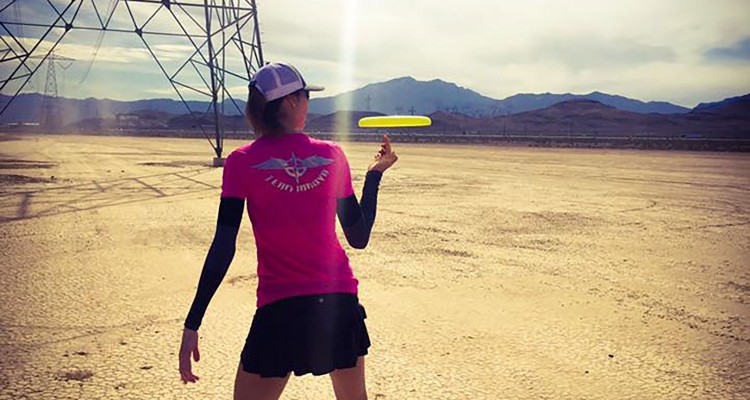 It’s been awhile since Juliana Korver last toured as a disc golf pro, but she’s still doing amazing things with flying discs. Just watch her in an overall flying disc competition or at her latest passion, freestyle, and you’ll see.

At the beginning of August, Korver, a 5-time PDGA World Champ and Disc Golf Hall of Famer, competed with the sport’s best at the Freestyle Players Association World Championship in Brooklyn, NY. Granted, Korver did not win in Brooklyn, she’s only been seriously playing for about a year, but she felt strong about her performance at her first major freestyle-only competition. In the open pairs division, she and her partner advanced to the quarterfinals and finished 25th out of 37 teams, a big deal after being seeded as one of the last teams.

Having been bitten by the freestyle bug, Korver wants to continue working to master the sport. “I still have so much to learn, but I’m starting to scratch the surface of being able to string multiple moves together (hopefully with grace),” said Korver, 45, a software engineer from San Diego. Few disc golfers may be familiar with freestyle. It’s a sport that resembles a dance with the disc, incorporating everything from cool throws and amazing catches to skips, spins, and various rolls off the body.

During competition, players are usually teamed with a partner. Teammates then exchange creative disc moves to music for a few minutes. After which, the team’s performance is judged and the highest score wins. “When done well it is mesmerizing. It can take on so many different flavors as there are seemingly infinite possibilities,” said Korver.

Though still wet behind the ears in freestyle, Korver has mastered overall disc competitions, which ranks participants after competing in several disc disciplines like distance, accuracy, self caught flight, freestyle, even disc golf. She’s won the women’s division in these overall competitions six times including the WFDF World Championships and the US Open Championships held in July. During the Maximum Time Aloft (MTA) portion of the self caught flight event (at the US Open) her time of 9.97 was a new world record for women 45 and over. In MTA, a competitor launches a disc and tries for the longest possible air-time before catching it with one hand. She’s starting to rack up the records. In March, Korver broke the distance record for women 45 and over with a throw of 443.6 feet at the High Desert Distance Challenge. Here’s what Korver uses for events at overall competitions:

Though she’s quite good at these overall events, Korver’s mind is often just on one of them, freestyle. When she has the time, it’s freestyle that she practices. And though it can be frustrating to learn new moves, more often than not she’s able to get into an enjoyable groove during practice. But don’t expect to see her submerse herself completely into freestyle like she did with disc golf in the late 1990’s to the early 2000’s when she made it her profession. She says she has so many different interests, she’d hate to limit herself. “However, one never knows how things will play out in the future. I’m enjoying the freestyle ride and I hope it will take me places that I can’t currently imagine,” said Korver.