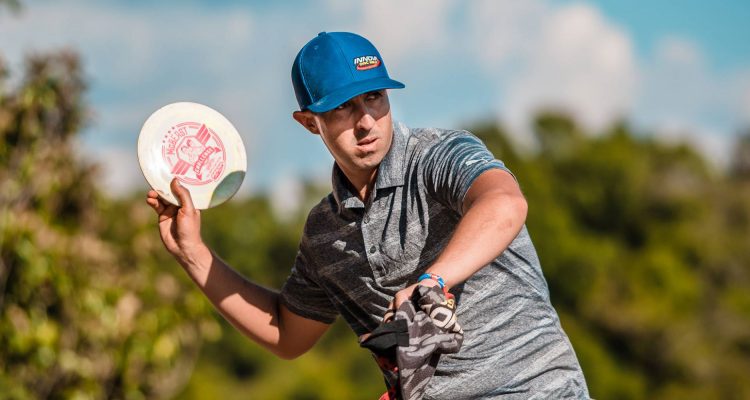 McBeth’s tee shot on hole one of the final round. Photo: Eino Ansio

Peaking at the right time
McBeth came to Rock Hill, SC on the heels of a win at the Delaware Disc Golf Challenge National Tour event in mid-September. Momentum on his side, his first two rounds on the Winthrop Gold Course were stellar, shooting a combined -25 and nearly bogie-free. Rounds three and four weren’t as smooth. He shot a combined -9 for the last two rounds with 10 bogie strokes. Still, McBeth had a five stroke lead and a plan going into the fourth and final round. 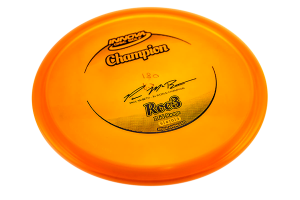 And close it was. Heading into hole 17, one that has single-handedly cost leaders the Championship in years past, McBeth had a 3-stroke lead over card mates James Conrad and Kevin Jones.

“I knew to conserve my energy to the end. Not worry about what was going on early. Just stay close.” —Paul McBeth

Hole 17 Live
For 2018, the 20th Anniversary of the USDGC, Innova brought in live media experts, Fulcrum Media, to help produce a live show for the final two rounds. On a stage nestled between the fairway and the lake on Hole 17, commentators Avery Jenkins and Jamie Thomas shared action on the lead card and hole 17 as players cycled through. Special guest and five-time USDGC champion Ken Climo was in the booth as the final round lead card came through.

Disc Golf’s Most Challenging Penultimate Hole
McBeth was first to throw and with hundreds of fans in the gallery walked up to the tee with his trusty Nova. “That’s always a good position to be in. But, on the other hand, If you do mess up, it gives ‘em that window,” said X-time USDGC Champion Ken Climo. After a short hesitation, McBeth proceeded to launch his disc and hit an early tree. McBeth made the green on his second throw, but you could sense the drama, as Climo mentioned “You can hear the hinges creaking.”

The tension turned to hole 17’s green. Kevin Jones and James Conrad were each putting for birdie, McBeth for bogie. Jones was first to putt, looking back toward the target with the OB hay bales just beyond. Focusing with a slight breeze in his face, Jones quickly launched a putt that sailed up and over the target and the hay bales. Taking stroke and distance, Jones was forced to putt from the same spot and zoomed left of the target, nearly flying OB again, striking the top of the hay bales and landing feet from the target. Conrad landed 15 feet from the target, tapped in for birdie, pulling within a single stroke of McBeth.

Closing Strong
The gallery shuffled up the hill on hole 18 creating a human wall along its spectator ropes. Sitting alone in second place, Conrad was first to tee and launched his disc to the right side of the fairway settling behind a large tree just in bounds. McBeth threw a mid-range, counting on a straight-finishing flight, and landing center fairway setting up a crucial upshot.

“This is the one. He can put it down on this shot and pretty much ‘game over’,” said Climo as McBeth setup to throw. It’s a technical shot—uphill, flanked on both sides by OB with a left-curling fairway and downhill finishing green with water beyond. Guarding a 1-stroke lead, McBeth launched his shot, streaking just feet above the ground and, as if by remote control, faded around the corner, skipped through the wood chips and settled close to the elevated target. Conrad would have to throw in his shot from an brutal lie to force a playoff. Forced to throw a flexing upshot, his disc turned up the fairway and struck a tree along the right side coming to rest in bounds but more than 60 feet away from the target. McBeth was parked. The other players finished out, setting up the winning tap-in putt. And without hesitation, he stepped up and hit the routine 10-footer, capturing his second USDGC title and his first PDGA major since the 2017 European Open.

Relieved, McBeth concluded “This is my second one, it’s the 20th, it just keeps getting better and better.”

McBeth celebrates after his putt on 18. Photo: Eino Ansio

Check out the debut of Hole 17 Live for round 3 and round 4. And don’t miss full coverage from JomezPro beginning with round 1 lead and chase card action.

The Choice of Champions in 2020

Innova is honored to support athletes and brand ambassadors around the world. Our athletes represent...More

The phenomenal Finn, Henna Blomroos, has signed a 1-year agreement to join the Innova Star...More