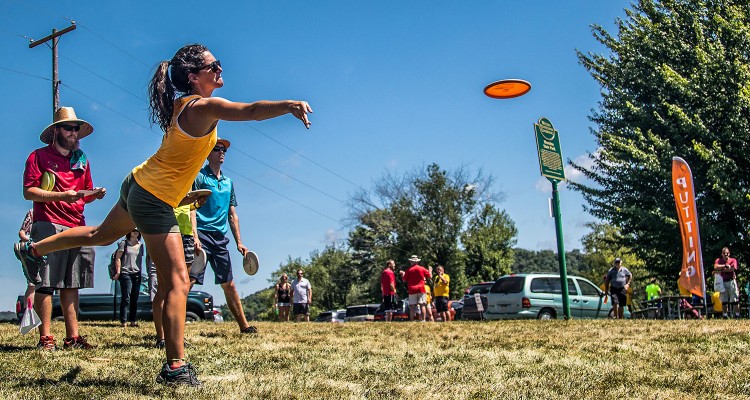 Of all of the new courses you’ve hit in the last couple of years, which one blew you away the most in terms of sheer awesomeness?

I have a handful of favorites: DeLaveaga, Maple Hill, Hawk Hollow, Haywood Valley, and Throw Down the Mountain. Even though they are very different environments, I feel like they are similar in my ways. I love that they are mentally challenging courses, forcing you to focus on both placement and consequence of every single throw. It’s also refreshing and, in my opinion, far more impressive when a golfer has to use every type of shot in their bag to score. Besides all the technicalities, there is also just this “feeling” you get when you arrive at these courses. You know it’s a good sign when I’m already looking forward to the next year’s tournament before I even tap in my last putt! I also really love the course at Nantucket, but I might be biased because it’s on an island of beautiful beaches! Seriously though, the layout is amazing, it’s perfectly manicured, and, in my opinion, it’s the epitome of what a professional-level disc golf course should be.

How would you compare the disc golf tournament experience for women compared to men?

I think it’s a similar experience as far as mental game goes. We are all doing the same thing, playing the best we can with whatever challenges the course and the weather provide. However, I do think it is a little different when you look at the social part of the game. I’ve heard countless caddies observe the same thing again and again, “Wow, the women know how to keep it real! You guys have so much fun!” I think most women go out of their way to make everyone around them feel comfortable on the course, socializing with competitors and observers and even cheering for each other. There is still a great level of competition, but with an added bonus of tons of encouragement.

How has your perspective on women’s professional disc golf changed now that you have spent some time on tour?

I was surprised to find that it’s not much different from playing at smaller C-tiers or unsanctioned events near home. Again, I think it has a lot to do with the fact that we are playing with women. There are definitely some times when you are on a card where everyone is super focused and wearing headphones and no one is chatting, which feels very bizarre to me, but generally, there is at least one other cardmate that keeps it real. What advice do you have for ladies who aspire to go on tour?

Don’t be afraid to make the jump! It is no different from playing with women at home, except that there are so many more women you get to play with! Don’t be intimidated, playing with women that are maybe better or more experienced is not like playing in your hometown with men who are leaving you in the dust. (*Disclaimer* I know that not all dudes are jerks, because my community of golfers at home were THE BEST, but it is one of the complaints I hear the most from new lady golfers.) Women disc golfers on tour want to help and I’m telling you, most of them are SO excited to see new faces, no matter what skill level! Also, you don’t have to just jump in and go on a full tour. Start smaller, go to an A-tier with a big women’s field and meet people. Networking is the most important part in eventually making a long-term tour happen!

If we as a community could do one thing new, better, or differently to promote women’s disc golf…. what would it be?

This question is hard for me to answer succinctly, especially since there are so many ways this could go, but I’ll just list a couple simple things I’ve noticed in the past year. Tournament directors are so helpful to all levels of women golfers when they save ladies spots, especially on registrations that fill quickly. Spots don’t necessarily need to be held for long, but give these new ladies a week or two to come out of their bubble and commit to something that might be out of their comfort zone! Another idea for the higher-tier events: when fundraising for a tournament, maybe try to find a couple of extra sponsors that are woman-specific. This could help create a women’s purse instead of just the normal small percentage of the pro purse. Tournament directors that do this little something extra WILL draw large numbers of women that will come back (with their friends) year after year.

We recently did an April Fool’s gag announcing McBeth’s buyout of Innova and change to “McBeth Disc Golf”. If, in like real life and stuff, it became Madison Disc Golf, what would you do on your first day in office?

I’d probably take the day off and go surfing! Hahaha, but seriously, first and foremost, free sandwiches for everybody on staff! For the disc golf community as a whole, I’d release a Madison Walker “Music Choice of Champions” custom-made mix CD available for free download on the Innova website (life-changing stuff right here). Finally, I’d draw a custom hot stamp that is a some kind of fish or bird or amphibian or reptile species for each disc in my bag. If you love your discs, you love your game!

If you could only play one more round of disc golf ever, where would it be and which three players would round out your foursome?

I can’t think too hard into this because everything is my favorite and everyone is my best friend, but I think I’d play at Vibram, complete with a mid-round dip in the waterhole catching newts and an air dry hammock sesh. I could never narrow it down to three humans and I’d way rather play doubles, so what is that, eight people on my card now? Obviously I’d team up with my World dubs partner, Zach Melton, and we’d inevitably have Paige and Jerm on our card, mostly because they’re an easy team to beat. I can’t live without the smack talking from my Florida-to-Asheville duo, Coby Guice and Colin Forehand, duh. Finally, last but not least, two of my favorite golfers to watch and favorite people on the planet, Randon “Donny” Latta and Calvin “Vinny” Heimburg. That’ll do.

Thanks Madison! Keep up the hard work and best of luck throughout the season.

What are some of the challenges you face when looking to grow awareness for the...More

Which would be your preference? And do you sense that women may sometimes tend to...More

Many people may not realize that the year you (Cam) won your PDGA World Championship...More

Who was the first female disc golfer you saw throw that could really bomb it?...More