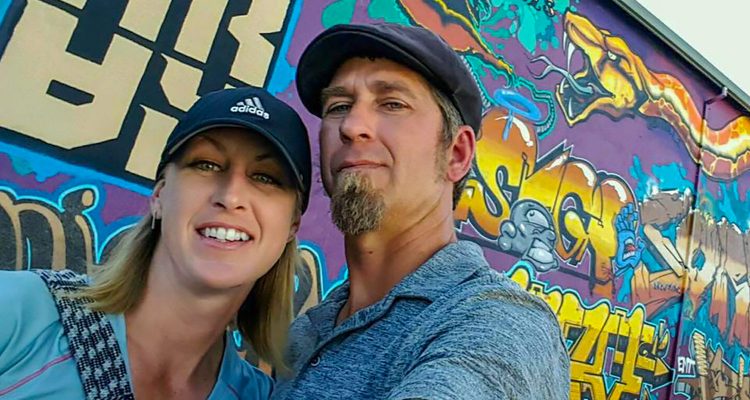 In this edition of our Player Spotlight we want to turn our attention to two, long-time friends of the Innova family. We have had the privilege of knowing both Cam and Lesli Todd for many years. Not only are the accomplished touring professionals, they are extremely cool cats to hang with outside the tournament setting. Back in May of 2016 we struck up a conversation about potential sponsorship for Cam and Lesli, after learning more about their full-time commitment to disc golf and life on the road. We are proud to have them both on Team Innova and to share a little more about them here.

First off, you guys recently celebrated your 11-year wedding anniversary together. Congratulations on that! What has been the most important factor in maintaining what is by all appearances, a very happy marriage?

Lesli: I think acceptance is a key ingredient and understanding that marriage is an ever evolving relationship, that you have to work at. I consider us both very loyal, committed people and I have always known that Cameron is my soul mate. No matter what I love him unconditionally and he loves me.

Cam: Honesty and trust have been significant but we have a connection that we can’t always explain. Soul Mates would be the best way to describe it.

Would you tell us a little bit about that moment when you first met?

Lesli: The first time we met was at The City of Mobile Championships in my hometown. I don’t remember a lot about our first encounter but then we were reacquainted later that year at the USDGC and then again in Gainesville, FL. It was at that tournament that I knew this was the guy I wanted to spend my life with.

Cam: The first time we met was at The City of Mobile Championships in 1999. All I can remember is how intriguingly beautiful she was. It was just shortly after, we were compelled to find out more about each other and build a life together.

So when and where did you first play disc golf?

Lesli: My first experience with disc golf was at night. I played a glow round with a group of friends at Chickasabouge Park in Mobile, Al. I had never really played many sports because I spent most of my time in the dance studio but I was instantly intrigued by the concept. The next day I went out and played a round at Municipal Park and have been playing ever since.

Cam: The first time I played disc golf was in 1997 at Wills Park in Alpharetta, GA .I heard of Frisbee Golf prior and had been searching for the elusive game for years. I finally found myself peeking behind the couch at a buddies during a jam session and I saw some discs. “Stop the music, is that Frisbee golf?” I asked him. He said no, it’s disc golf. I was stoked and asked him to take me immediately. That’s when I saw and played my first disc golf course and of course I was hooked instantaneously. You are both accomplished tournament golfers, with playing careers that date back to 1998 (Lesli) and 1992 (Cam). Do you recall much about your very first PDGA sanctioned events?

Lesli: (City of Mobile Championships, Mobile, AL / 1998) I am not even sure if this was my first sanctioned event but I do have a fond memory of this tournament. I came in 2nd to Sue Stephens and it was the first time I had met full time touring pros.

Cam: My first tournament was Tennessee Flying Disc Championships. I was delusional with expectations of winning, and I fought as hard as I could without looking back. Suddenly with nine holes left to play I asked for the score card so I could tally the score and see where I was standing. I came to the dimming conclusion that I could ace every hole and still not win. I was 31 strokes behind and I knew then how much work I had to do and was eager to get started. I did however accomplish something great for playing only 6 months at my first PDGA tournament where I played Open, I actually won the putting contest. It was against the greats at the time and I received a basket for the top prize. I was stoked and knew I found the sport for me.

What was your most satisfying win?

Lesli:It is hard to say because I think each win is special in some way but I would say it’s a tossup between the 1998 Amateur World Championships or the 2000 USWDGC (I think it was called “Women’s Nationals” back then)

Cam: Well I believe it would have to be the 2001 PDGA World Championships. I set a goal mostly to win that title. I have cherished it every day and remember it like yesterday.

Cam: Even though loss is part of life, it is still disappointing. I seem to clump them all together however one does stick out. Try going into the last round leading by 11 and end up losing by 2. That was a heartbreaking moment at the Melbourne Open.