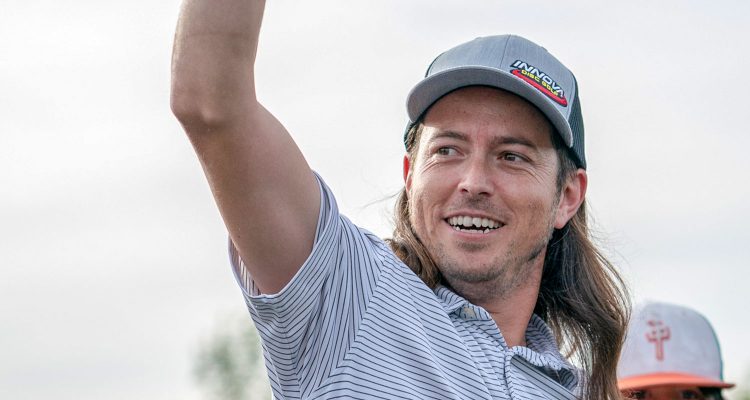 We caught up with newly crowned World Champion Gregg Barsby after his dramatic win in Jeffersonville, VT at the 2018 PDGA Pro World Disc Golf Championships. He talks about preparation for Worlds, key discs in his bag, and what it took to win this hotly contested event.

Barsby said he benefited by staying with David Wiggins and friends. “David is a good friend of mine, and the vibe there was great. Justin Anderson kept things loose and light while Matthew Karnes shared stories of his military service. Matthew talking about digging up bombs in the Middle East made me think… I am really that worried about a 30’ putt? He helped keep things in perspective.”

Worlds is grueling. Players competed in five rounds over five days and he had a plan to keep his game on track when shots didn’t go as planned. “Not starting well shook me awake. I told myself to just keep playing, that I can’t change the past, and that patience paid off as eventually shots started dropping.” 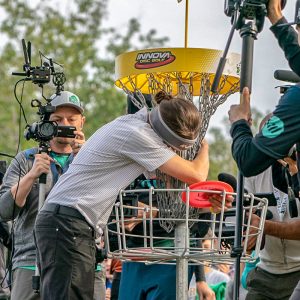 Gregg Barsby after the final putt

Barsby is admittedly forehand dominant, but has been working to get his backhand confidence up. “I put in some time in Europe making sure my backhand would be ready when I needed it. You have to have both shots in this game, and although I have supreme confidence in my forehand, I wanted to get my backhand confidence closer to 50/50. You want to be able to pick the best shot for the situation.” He knows that practice helped this weekend. “I just wanted to focus on throwing straight lines and hitting the spot.”

Barsby had a two-shot lead going into the final round on the Fox Run course. He overcame a slow start with a string of birdies on holes 4-6 but stumbled on the course’s most difficult hole, the 1225ft par 5 seventh hole where he took his only bogie. Anthon’s late birdie charge and McBeth’s bogie-free effort couldn’t overcome Barsby’s score of 57. Barsby captured the win two strokes ahead of McBeth and Anthon who rounded out a sweep for the top three Open spots. In FPO, Jessica Weese tied the hot final round score of 62, finishing 13 strokes out of first behind FPO World Champion Paige Bjerkaas.

Eagle in the Clutch

If there was a go-to disc in the bag it was his red Champion Eagle. He felt supreme confidence trust in that disc, so much that it was the disc he turned to for the final critical upshot on Hole 18 to help secure victory.

Other trusted discs were the Barsby Star Roadrunner, Star Firebird, Millennium Scorpius, his green Star Destroyer, and his blue Thunderbird. “I knew Josh would push, that he wanted it more than anyone, and that if he got too far ahead things would get much, much, harder. That Thunderbird shot was a crucial moment for me in the round.”

Next steps for the 2018 World Champion is to get back on tour with his travel buddy Philo Brathwaite starting with a clinic at Heckscher Forest Disc Golf Course in East Islip, New York on Tuesday 9/18 at 5pm. They are planning on playing tour stops in Delaware, New Jersey, and New Hampshire, on the way south to the USDGC.

Not the most favorable of tournament conditions, however that is what competitors faced for Sunday’s...More

Team Innova continues to gain momentum heading into the heart of the tournament season. This...More

Gregg Barsby is one of disc golf’s most beloved characters. Hailing from Grass Valley, California,...More