It was a weekend of nail-biting competition and unmatched scenery at the 2022 PCS Sula Open presented by Innova. Players from 15 different nations battled in Norway at two of the world’s top rated disc golf courses. Gregg Barsby secured the MPO win for Team Innova in a one-hole playoff against the Czech player Jakub Semerád. The competition was fierce and featured back and forth lead changes up to the very last hole.

Vasset and Øverås Diskgolfparks are as beautiful as they are challenging. Rolling hills, manicured greens, treacherous, glistening water hazards, and expansive views over the Norwegian Fjords make this area of southwest Norway one of the most idyllic disc golf destinations in the world. Scenic as they are, the courses played extremely tough. Between four rounds at the two courses, even par averaged nearly 1020 rated. 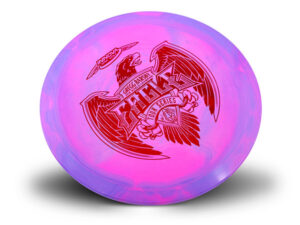 It was a battle between precision tee shots from Jakub Semerád versus world-class putting by Gregg Barsby. Semerád led the field in Fairway Hit percentage, and Circle 1 and 2 hits in regulation for the weekend. Though he may have out-thrown Barsby off the tee, Semerád struggled on the putting green. Barsby, on the other hand, lived up to his reputation as one of the best putters on tour. He was second in the field in Circle 2 putting and Strokes Gained Putting for the weekend. In the final round, he did not miss from C2. During that round it seemed like the basket was in danger no matter where Barsby found himself, with him nearly sinking four huge throw-ins from well outside Circle 2. Barsby was absolutely dialed inside 150 feet and that led him to his victory.

The final round was back and forth from the first hole to the last. Gregg Barsby started his round with a bogie, extending Semerád’s lead to 3. Only two holes later, Barsby cashed a huge downhill putt from way outside the circle for birdie on the same hole that Semerád took a double bogie. After repeated lead changes through the rest of the round, Semerád went into hole 18 with a one stroke lead. Trying to lay-up for par, Semerád overthrew his landing zone due to the final hole pressure and found himself OB. Barsby walked through this open door, took his par, and headed into a playoff with momentum. The two replayed hole 18 and Barsby ended up with a 20 footer for the win.

Though Gregg Barsby is the 2018 World Champion and has been a dominant force in the sport for well over a decade, this is his first Disc Golf Pro Tour win. As he wielded the three foot battle-axe that is the PCS Sula Open presented by Innova trophy, Barsby let out an uninhibited yell that told louder than words just how important this Silver Series win is for him. ‘Barsbarians’ around the world reveled in the sound of Barsby’s victory cry. Barsby is undefeated at the Sula Open, taking down the event in 2018 as well, just two months before winning his World Championship title. This year’s PCS Sula Open victory comes on the heels of a big A-tier win at the Majestic. Barsby will be heading into the rest of the season with some well-foundationed confidence.

Barsby was far from the only player on Team Innova who excelled in Norway last weekend. Norway’s own Katarina Staalesen fought her way to third place, making for back-to-back weekends of podium finishes at A-tier events. Calvin Heimburg finished in a tie for fifth place, moving him into second place in the DGPT points standings for this season. James Proctor managed a top ten finish, shooting the hot round for the weekend, an eight under par at Øverås Diskgolfpark in the third round. Knut Valen Håland, course local to Vasset and Øverås, shot three under par for the event, placing him in 12th. Iceland’s Blær Örn Ásgeirsson took 14th and was one of only 15 players out of 124 to shoot under par for the weekend. The Norwegian Peter Lunde had a respectable 21st place finish. And perhaps most exciting of all, Kristofer Hivju, the actor who played Tormund Giantsbane on HBO’s Game of Thrones and an Innova Celebrity Team member, competed in the Open Division against Barsby and the rest. The Norwegian icon averaged 25 points above his player rating for the event. After competing, Hivju was given the honor of announcing our 2022 PCS Sula Open presented by Innova champions at the awards ceremony.

Team Innova is already having a sensational 2022 season and some of our sport’s biggest events are yet to happen. This weekend’s European Open will feature the top players from around the world including Gregg Barsby.

Disc golf exploded at a time when out-of-country travel and competition was not possible. As borders reopen, it is exciting to see that the boom has been international. Overseas tournaments allow disc golfers from the States to experience new styles of courses, local pros in other countries to learn from and compete against the best, and disc golf fans to watch world-class competition on the world’s best and most beautiful stages. At the 2022 European Open, expect competitors from across the globe to show up hungry to win this Major title.