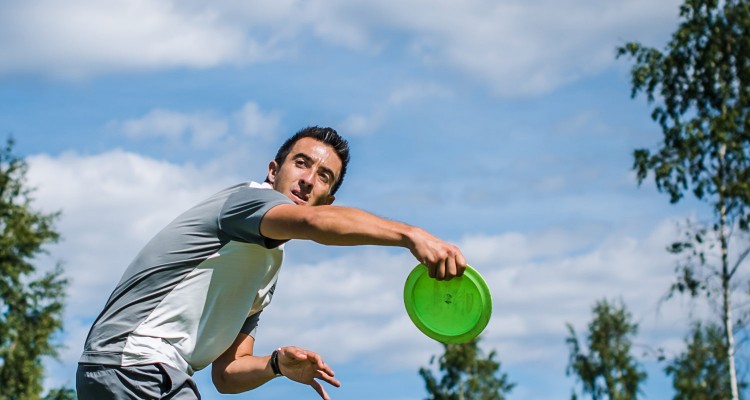 Innova fans are now able to enjoy two new Signature Series discs from two of our most successful and influential team members. Avery Jenkins has been a member of the Innova family since 2001. During that time Avery has toured the world extensively, racking up more than 55 career wins as a professional. His most significant win was the 2009 Pro World Championships in Kansas City. Along with that win came Avery’s Signature Series Star Destroyer, which made its debut in the spring of 2010.

Since its release, the Destroyer has remained an extremely popular distance driver for top pros, as well as many advanced and amateur players. The Destroyer provides a consistent combination of speed, stability, glide, and accuracy. It is a dependable distance driver for any serious golfer looking to elevate their game. One player who holds the Destroyer in particularly high regard is current World Champion, Paul McBeth. McBeth has been on a tear in recent years. In 2015 alone, Paul completed disc golf’s first ever, in-season Grand Slam. This historic accomplishment was achieved by Paul’s sweep of all five Major Championships as sanctioned by the Professional Disc Golf Association. Those events were the Aussie Open, Scandinavian Open, European Open, PDGA Pro World Championships, and the United States Disc Golf Championship. Over the course of the 2015 season Paul earned 19 wins in all, finished 2nd place four times, and finished in 3rd place twice.

Paul began throwing the Destroyer in 2007 as soon as they became available to Innova team members for testing. “They became a staple in my bag on day one, and I honestly don’t remember ever having fewer than three Destroyers in my bag at a time,” said McBeth. Fast forward to 2016, McBeth is preparing to build on his success and the Destroyer is as prominent in his bag as it ever was. “I love the Destroyer’s consistency. The distance and control is unmatched in my opinion. I typically carry 5-7 at a time on a regular basis,” said McBeth recently.

Discussions with Paul and Avery over the future of the Signature Series Destroyer began in the summer of 2015. There is no doubt that the model’s success was due, in part, to the massive fan base that Avery has established over the course of his career. The one player who could continue to propel the Destroyer’s legacy to the extent that Avery has, is Paul McBeth. So, the transition began. “I only dreamed of having the Destroyer as my signature disc until after I won my third World Championship title. I had heard that Avery might start taking more of an Ambassador role in disc golf. When I heard there was a chance, I immediately began to do everything in my power to prove I had what it takes. If claiming a fourth title was what I needed to seal the deal, I was not going to let anything keep me from accomplishing that,” Paul said.

Avery agreed that only one player’s name should replace his on the Destroyer. “He (McBeth) personally asked me about the possibility of working something out for signature rights to the disc,” Jenkins said. “From my stance, I truly couldn’t think of another player that I would rather have representing the Star Destroyer. Paul is an incredible individual and a constant, worldwide ambassador for our sport,” said Jenkins. “I am very happy for the new addition to his current line of discs and I know that he will continue to make us all proud.”

The first Paul McBeth stamped Destroyers hit shelves in late September of 2015. Paul was on his march towards disc golf’s first ever Grand Slam. Also at that time, Jussi Meresmaa announced his plan for the inaugural Disc Golf World Tour. Shortly after the DGWT announcement, the news broke that Jenkins had agreed to become a co-commentator for the 2016 Disc Golf World Tour. In an official interview with All Things Disc Golf , Jenkins described the upcoming transition like this:

I have played disc golf for the past 30-years of my life and I’ve competed as an elite touring player for the past 16-years. It’s been a great run, but things will be slowing down a bit as I plan on dialing back the tournament schedule. I still plan on playing a few sentimental events and other extraordinary tournaments including the World Championships to keep my streak of 18 consecutive appearances. I will continue to be present at many of the Major Championships and the Disc Golf World Tour events as I want to see those become more professional.
– Avery Jenkins

We are excited to see Avery expanding his role this year to include even more promotional activity for the game. This should be one of the most exciting years in disc golf history and Avery is stepping up in an extremely visible and significant way. Part of Innova’s support for Avery in this new season will be a Signature Series Star TeeBird. Like the Destroyer, the TeeBird has been an influential disc for countless players of nearly all skill levels. “I am honored to have the Star TeeBird as my new Signature Series disc, as it’s a model that I have been personally throwing for over a decade. I really look forward to seeing new players come to appreciate the need for accuracy over distance, which is crucial to scoring success,” said Jenkins.

Since the TeeBird made its debut in 2004, it has been a prominent disc in Avery’s bag. “I absolutely love the consistency of the Star TeeBird. I believe it is easiest to control and the most accurate driver in the game. It goes exactly where you throw it. For years the TeeBird has been my go-to fairway driver for accurate, shorter drives that must be center cut.” Both Signature Series models should be in full distribution by early spring. If you have not yet thrown one of these models be sure to test one out. We also encourage you to visit the Disc Golf World Tour website . The DGWT promises to be one of the brightest new additions to the landscape of professional disc golf. See you on tour!