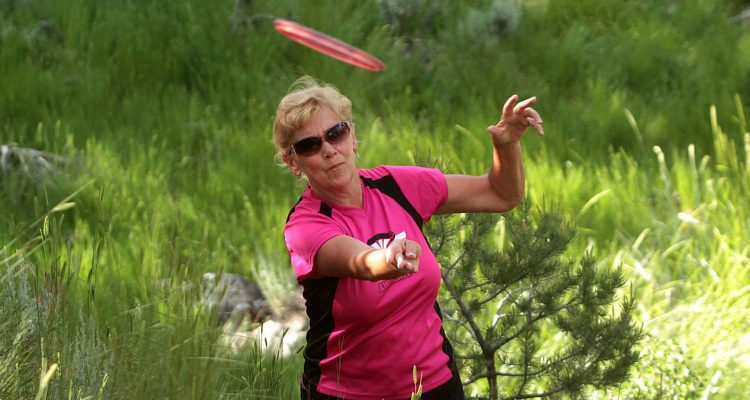 One of Innova’s newest sponsored athletes, Kona Panis, recently earned her first professional win at the Aviary Fools tournament in Colorado Springs. Colorado Springs is home to Innova Ambassador Kathy Hardyman, who happens to be the first person to recommend Kona for Team Innova. And who finished second place to Kona at Aviary Fools? That’s right…. Kathy.

These two ladies are a wonderful example of the diversity in the disc golf player base. Kathy discovered disc golf later in life, yet has gone on to win, among many other things, five consecutive World Championship titles in the Pro Women’s Grandmaster division. Kathy has also been an active disc golf promoter and supporter of women’s disc golf.

Kathy and Kona represent two distinctly different generations. In this two-part interview we will help you get to know each of them better personally, and explore their different perspectives on the game. Today we begin with Kathy. Kona is on deck for tomorrow. Enjoy.

When and where did you first discover disc golf?

Walking around our park down the street in the late 90’s, we saw someone throwing. We stopped and talked to the guy, threw one of his discs, into the trees & lost, and decided it would be something more interesting than just walking for exercise. Our first solo excursion was with a Whamo, after which we made a trip to the store for a “real” disc. We threw those first discs until they broke hitting trees. We became known as the “speed golfers” and people just let us through. Little did we know where our change in exercise routine would lead!

Which of your disc golf accomplishments are you most proud of?

Five in a row FPG World Championships is right up there. But my very first US Women’s Championship I played Pro Master in a division of 12 and won. That was a pretty exciting one and I met many new friends including Mom & Old Man (Wallis) and started a whole new chapter in my disc golf career.

How has women’s disc golf and participation levels changed during your career?

I wish I could say there are a lot more women now. More yes. A lot more, no. My first full year playing events, 2002, I played advanced and if we had three, we were doing good. Now we see at least 2-3 am divisions in a tournament. Unfortunately in pro, open is still my only option most of the time. I play against women 20, 30 and 40+ years younger and every year they get tougher. I’m sure that’s not just me getting older. Women are starting younger, throwing farther and treating it as a sport and they are truly athletes. Who do you feel is the greatest female disc golfer in history?

In the history of my disc golf years, I would say Juliana Korver. Her game was so smooth, she was one of the first really good female players I knew of and saw and she gave other women something to strive for, someone to be like.

How important is it for women just starting out in disc golf, to find other ladies to play golf with?

For many, it’s critical or they won’t keep playing. I grew up with four brothers, so playing with and wanting to beat the guys was nothing new for me. But I see women go out with their husband or boyfriend, get handed an overstable heavy disc and after a couple of times, they don’t really want to play. They need to see other women playing, know that it’s okay they can’t throw as far as the guy that showed them how. The friendships and camaraderie will keep them playing. And we women who are out playing need to be friendly and encouraging so they want to come back.

What advice do you have for young ladies determined to pursue a professional competitive career in disc golf?

How I wish I’d found this sport young! Practice, practice, practice, watch the pro women, watch videos, be willing to learn. Win humbly, lose graciously. Be the kind of person you would want to play with. Work hard, but smart. You’ll have to do practice putts and field work when you’d rather do something else, but don’t beat yourself up when you have a bad shot, bad round or bad tournament. Some women advance quickly, some it takes a lot of work and practice. Find that player you admire and watch them, one day you’ll be playing them and learning first hand. And always remember where you started, how you wanted to be treated so you can bring the new women with you. As women, we have to be willing to grow the sport or there will not be a professional competitive field.

Join us again tomorrow for part 2 of our player spotlight featuring Kona Panis.