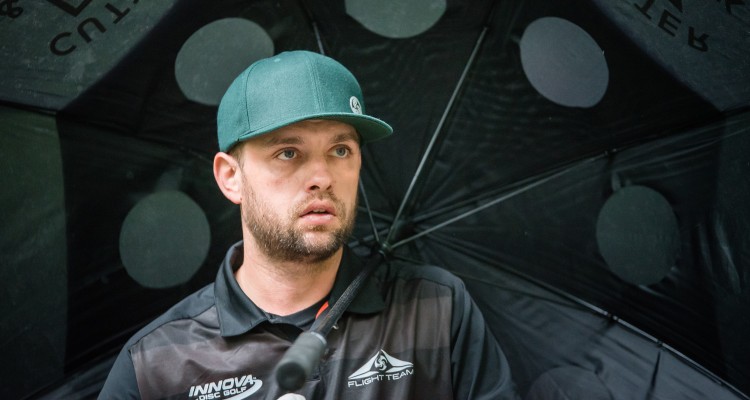 Steve Brinster is a rock-solid PDGA Tour veteran whose pro career dates back to 1997. He now has 80 Open Division wins including the 2013 United States Disc Golf Championship, a PDGA Major. Brinster is fan-favorite for many, not just because of his success and demeanor on the course, but too because he holds down time a full-time job and is a dedicated family man.

In addition to his other responsibilities, Brinster found time to be the tournament director of this weekend’s Warwick Disc Golf Championships. It is not easy to organize and compete in an event simultaneously. However, Brinster managed to do both extremely well. Steve finished at -16 for the tournament which was enough to outlast teammates Bobby Cowperthwait and Andrew Fish who finished tied for second at -13. “Being the TD added to the challenge, so I am pretty psyched to come out on top” said Brinster.

Brinster quickly gave credit to a team of people who made the tournament a success. He pointed first and foremost to teammate and good friend, Craig Cutler. Cutler has run the fall tournament at Warwick since 2009 and was heavily involved again this year. “I wanted to relieve some of the responsibility from Craig this year so he could enjoy the experience even more as a competitor” Brinster said. “Craig has without a doubt been a primary influence for this tournament and for disc golf throughout the region” added Brinster. Cutler would wind up finishing in a tie for 10th in Men’s Open. Team Innova found success in the Open Women and Masters Divisions as well. Hannah Leatherman was in attendance, still flying high from her recent win at the US Women’s Championship. Leatherman grabbed the lead in round one and cruised to her tenth win of the season. Joe Mela edged out Bobby Jones for a one throw victory in Masters. Glenn Patterson also played well in Masters, taking home the third spot.

Innova also notched wins in three separate divisions at the Norcal Series Championship in Lakeport, CA. Jessica Weese turned in a dominant performance to win Open Women, while Patrick Brown rallied in the final round to capture the Master’s crown. Jim Oates lead wire-to-wire in Grandmasters and went on to win by two.

In Lula, GA Sarah Cunningham picked up an impressive, late season win at the Zip Line Open Invitational. Sarah was able to hold off the top rated player in the world, Paige Pierce, as well as 5-time Women’s World Champion, Elaine King. Sarah had plenty of teammates to help encourage her along including Sara Lamberson, Debbie Scott, and Madison Walker who finished in the 4th, 7th, and 8th places respectively.