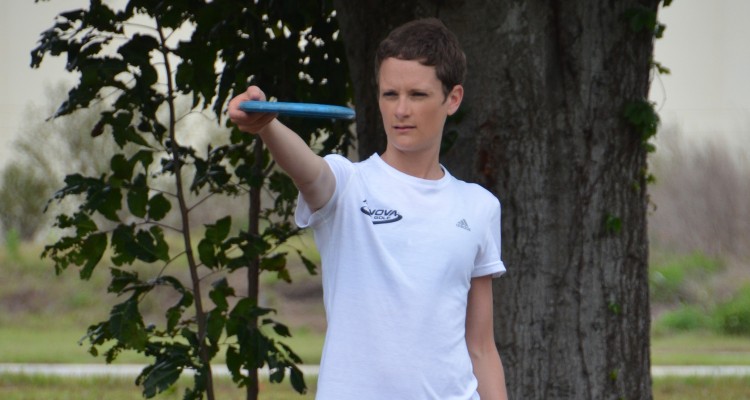 Hannah Leatherman proved this weekend that persistence is vital to success. After a neck injury forced Leatherman to withdraw from the World Championships in August, Hannah was determined to go home, rehab the injury, and return quickly to the process of sharpening her game. Hannah did just that.

This weekend Hannah found herself in contention at the US Women’s Championship in Ohio. After two rounds Leatherman was trailing tournament leader Valarie Jenkins by 5 shots. A win was definitely within reach, however chasing down savvy veterans such as Jenkins, Paige Pierce, Sarah Hokom, and Catrina Allen would be no easy task.

Hannah went to work in round three and fired a 52. Not only did that hot score tie Allen for the round’s best, it completely erased Val’s lead. She had done the only thing a competitor can hope to do, which is putting yourself in position to win. Going into the final round Hannah and Val were tied, four shots back of Allen. Pierce was three back. And Hokom was back just one. Game on.

Sunday proved to be a long and close battle. Allen fell off the pace early carding 4 bogies through the first 10 holes. Allen’s struggles left a neck and neck race between Leatherman and Pierce that lasted right down to the final two holes. Ultimately Hannah would emerge victorious after a critical drive by Pierce found the water OB. That sealed the deal and a one shot, Major championship win for Leatherman, the first of her career. Two more Innova ladies were also in fine form this weekend. Des Reading and Jennifer Allen battled all weekend long at the 10th Annual Four States Open in Joplin, MO. Des Reading was able to maintain the lead from wire-to-wire, but just barely. Allen kept the heat on and would finish in the second spot just one shot back. George Smith also held the lead in Masters from beginning to end, picking up a nice, two shot win. Other notable finishes from this week:

We are now down to the season’s final Major, the United States Disc Golf Championship. Championship Week kicks off this Friday with the US Amateur Doubles contest in Charlotte and Rock Hill. Then on Monday, October 5th, Monday Qualifying rounds are open to the general public and provide one last chance to qualify for the USDGC. The Championship itself begins on Wednesday, October 7th and runs through Saturday, October 10th. For more information visit www.usdgc.com .