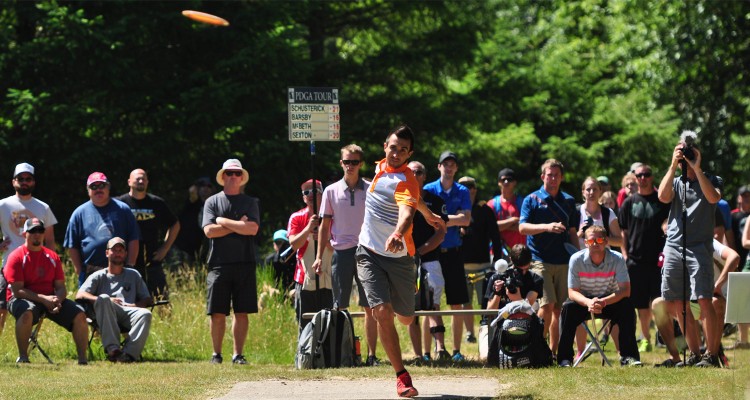 Estacada, OR – Paul McBeth needed extra holes to get it done yesterday but ultimately found a way to capture his third PDGA National Tour win of the season. McBeth found himself in relatively unusual territory at the Beaver State Fling; for Sunday’s final round Paul was not on the lead card. McBeth instead, was four shots back of 2014 United States Disc Golf Champion, Will Schusterick with 18 holes to play.

Schusterick put down a strong final round but McBeth carded back-to-back eagles on Holes 9 and 10 to get within one shot of the lead. The pressure was cranked up immediately and the gallery was pumped for the home stretch. Will extended his lead back to two shots on Hole 14 but gave one right back on Hole 15. Then a costly bogey on Hole 17 left them deadlocked with one hole remaining. Paul and Will are both former Beaver State Fling Champions. McBeth captured the title in 2011 but would follow that up with a 28th place finish in 2012 and a 15th place finish in 2013. Paul rebounded in 2014 winning his third consecutive World Championship title on these very same courses. Schusterick on the other hand, was the 2013 BSF Champion and had not finished lower than 4th at this event. After both players parred the 72nd hole this time around, the pair remained in a tie and the playoff stage was set.

Both players needed clutch putts to birdie the opening two playoff holes. Both of them delivered and it was on to Hole 3. At this point in the match even the slightest mistake would make the difference. Schusterick’s drive came up short, leaving him with a difficult birdie attempt which he failed to convert. McBeth’s drive landed outside the circle long, but still in good position for birdie. Will could only watch and hope for another chance. Known for his excellent putting, particularly when the stakes are high, McBeth drilled the 30+ footer for the win and yet another legendary performance. Jessica Weese picked up her first career NT win in Open Women. Jessica and Valarie Doss were tied for the lead after impressive opening rounds of 61. Jessica outpaced Val in round two to take a four shot lead. Val responded in round three by picking up all four of those shots, leaving them tied once again heading into the final round. Jessica had a steady round that included 2 birdies and 2 pars, which was enough to take down the win by one.

Patrick Brown continued his stellar play in Masters and clawed his way into a playoff of his own. Patrick came up short however, losing in sudden death to the Colorado veteran, Scott Stokely. Jim Oates continued his Oregon dominance with a repeat win in Grandmasters. Oates won the Grandmasters World Championship title in 2014, and was the Beaver State Fling Champion in 2012 and 2013. Other top team performances at the BSF were Nate Sexton (7th Place MPO), Drew Gibson and Kyle Crabtree (T-10th Place MPO), and Jennifer Allen (5th Place FPO).

Other top performances from this weekend: