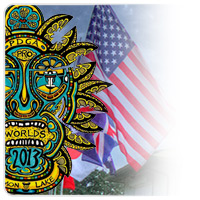 The 2013 PDGA Professional World Championships began this morning under delightful, unseasonably cool temperatures. Always held at summer’s peak, this week long event can often be a grueling physical test, in addition to the supreme test of disc golf skill. The weather forecast this year however, is shaping up beautifully for tournament competitors and spectators alike. photo by Chad Corduroy LeFevre
David Wiggins Jr. dominated the field events to begin the week with a bang. A strong right to left crosswind on the distance field gave left handed throwers a natural advantage. However, David was able to pump a Blizzard Champion Boss out to 558', winning the distance competition. That same day David also won Mini Golf (disc golf with mini marker discs and miniature targets), the EDGE Skill Shot competition, and tied for first place in the putting competition. A playoff to determine the putting champion will be held tonight at the Fly Mart, a trade show-like event where disc golf equipment and apparel companies showcase the industry’s hottest gear. photo by Chad Corduroy LeFevre
Des Reading, Sarah Cunningham, and Steve Brinster also found early success at the field events. Des won the women’s putting competition, Sara won the Skill Shot competition, and Steve finished second to Wiggins in mini golf after arriving just 5 minutes earlier from a 11+ hour trek to Worlds. Sara Cunningham is definitely excited to return to Crown Point. This was the site of her 2010 World Championship victory so she is quite familiar with what it takes to successfully navigate the challenging Lemon Lake courses. photo by Chad Corduroy LeFevre
This is also a significant week for Paul McBeth as he seeks to become only the third person in history to win back-to-back World titles in the Open Division. Ken Climo won 9 consecutive from 1990-1998, a record that most feel will never be broken. Barry Schultz won in Flagstaff, AZ in 2003 and then again in Des Moines, IA in 2004. McBeth would also become the fourth person ever to win multiple Open Division titles. photo by Chad Corduroy LeFevre
Innova would like wish all competitors the very best of luck this week. We would also like to extend a special thank you to Lemon Lake County Park Department, the South Shore Convention and Visitors Bureau, and the many tournament staff members working hard to make this event a success.