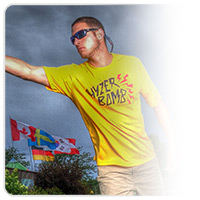 Congratulations to David Wiggins Jr. who completed a full sweep of the field events last night. David earned the world putting title in dramatic fashion during a playoff with Kenny Glassman at last night’s Fly Mart. It appears to be the first time any player has won all of the field events in a single year. "I tried for a long time to do it. I’ve won multiple events before but could never get distance", said teammate Mike Moser. "Sweeping them all is definitely impressive." photo by Chad Corduroy LeFevre
Team Innova is off to a solid start in the singles competition. Paul McBeth fired a 1067-rated round of 52 in round one putting him in a tie for first place in Men’s Open. "I just want to get back out there. I am ready to play some golf", Paul said on Tuesday night. Paul definitely seems prepared. photo by Chad Corduroy LeFevre
Valarie Jenkins and Des Reading began well in Women’s Open. The pair share 4th place at -4, just one shot behind the tournament leaders. Sarah Cunningham finished the day at +1 and sits in 7th place. The women will battle the 8716’ Lemon Lake Gold Course today which may definitely shake up the leaderboard. photo by Chad Corduroy LeFevre
Barry Schultz set the pace in Masters finishing -22 for day one. In his rearview mirror are teammates Ken Climo (-19), Jay Reading (-17), Patrick Brown (-17), and Mike Moser (-16). The Masters played the White and Red courses yesterday, and along with the Open Women, face Gold today.

While it is sunny and clear today the wind has definitely picked up. The arrival of an afternoon front should make for fairly windy conditions throughout the day, so watch for plenty of movement in all divisions. Round 2 is just finishing up now and live coverage of Round 3 begins at 2pm CDT.