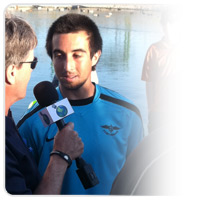 Will Schusterick and Dave Feldberg played absolutely lights out golf at the Memorial. They fought hard. They made it look easy. And then there was Paul McBeth. Paul is calm, cool, and collected. He’s not flashy, but this weekend, he was as perfect as you could ever hope to be. Booming, accurate drives combined with rock-solid putting made him simply impossible to catch, much less beat. Paul cruised to a -44 to become the second player in history to win back-to-back at the Memorial Championship.

On day three it looked as if Paul and Will would be the two players battling down the stretch. On the 17th hole however, which is one of the easiest at Vista Del Camino Park, Will missed a birdie putt that struck just low and rolled away, eventually finding OB. His putt to save bogey missed, while Paul dropped in for 2. Just like that, Paul’s 3-shot lead jumped to 6 heading into the final round. Most everyone in the field knew that 6-strokes would be nearly impossible to make up on McBeth in a single round. They were right.

Avery Jenkins finished 4th this weekend, showing a determination similar to 2009 when he won the PDGA World Championship title. Avery looked like a tiger on the prowl, gunning for everything, and generally hitting the mark. He seems poised for another fantastic touring season.

Valarie Jenkins leaned on past experience at the Memorial, dissecting the courses according to plan. "I have been coming here since I was a sophomore in high school", she said at the award ceremony. "The experience just keeps getting better and better." Well this year will certainly be memorable for her, as she held off all of the world’s best pro ladies to capture her first NT win of the season.

Jim Oates and Joe Mela were tops in the Grandmaster division. Joe was able to finally edge out AZ legend, Dan Ginnelly, on the 72nd hole to claim second place. Dan is also the Memorial’s long-time tournament director, which speaks volumes about his talent. Only a handful of players can successfully run an event of that caliber and compete well at the same time. Ultimately the Grandmasters division provided some of the best competition of the week.

Back across the country it was Josh Childs getting a win at South Carolina’s Earlewood Classic. Brian Schweberger continued his dominance at the Loriella Challenge in Virginia. Brian has now won that event 5 years in a row. David Wiggins Jr. picked up a nice win at the Inaugural Spring Fling and Ching in Statesville, NC, holding off former World Champion Cam Todd by one.

Team Innova is off to another outstanding season and we look forward to the year ahead.
Share it !